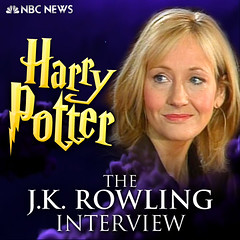 Even if you’re not a Harry Potter fan, you have to admire J.K Rowling. Not just as a writer with a world-class imagination, but also as a businesswoman and entrepreneur. She seemed to come out of nowhere to create one of the biggest entertainment franchises ever.

It’s hard to believe that she used to be unemployed, surviving on U.K. state benefits. That was 1995. Now it’s 12 years (and hundreds of millions of dollars) later, and she’s just finished her seventh and final Harry Potter novel, “Harry Potter and the Deathly Hallows.”

Rowling recently did an interview with Meredith Viera for the American news programs The Today Show and Dateline NBC. I only caught part of her Dateline NBC interview, so I was pretty happy to see that they posted the whole thing on iTunes. The interview is an interesting glimpse inside the world of Harry Potter, and it offers some real insight into the woman who created a billion dollar world of magic.