Upgrade Your iPod Sound With The Klipsch iGroove

Rock any room with the Klipsch iGroove HG all-in-one iPod speaker, a dynamic shelf system that works with iPods and other MP3 players.

Rock any room with the Klipsch iGroove HG all-in-one iPod speaker, a dynamic shelf system that works with iPods and other MP3 players.

The Klipsch iGroove has a couple of tricks yet to appear on other brands’ compact power speaker systems. First off, it comes with a pair of two-way speakers (woofer and tweeter), whereas most iPod-inspired alternatives rely on a single, small woofer per channel. Within the Klipsch iGroove’s compact dimensions, Klipsch engineers installed a stereo pair of 2.5-inch woofers and 1-inch horn-loaded tweeters that focus the treble sound up toward the listening position. A set of volume up/down buttons and an on/off switch are the unit’s only controls. The Klipsch iGroove is available in both matte-silver finish and high-gloss black, called the Klipsch iGroove HG.

The Klipsch iGroove comes with a handy mini-remote that adjusts the volume and your iPod’s play/pause functions, as well as changes tracks on your playlists. 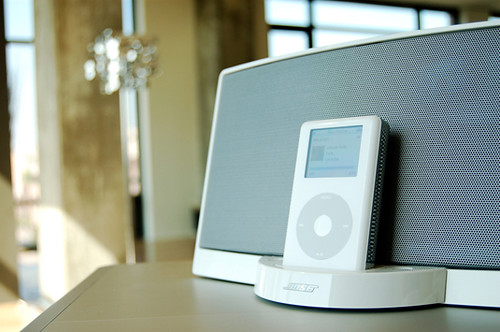 Like the Bose SoundDock, the Klipsch iGroove can accept any iPod with a dock connector. Full-size iPods, including the video-enabled fifth-generation iPod, fit snugly, thanks to an adjustable backrest. An adapter is included for older iPod Mini models, and Klipsch has begun bundling adapters for the iPod Nano as well. If you bought the early versions of the Klipsch iGroove that lack the Nano adapter, just call Klipsch’s customer support, who’ll ship one to you for free. 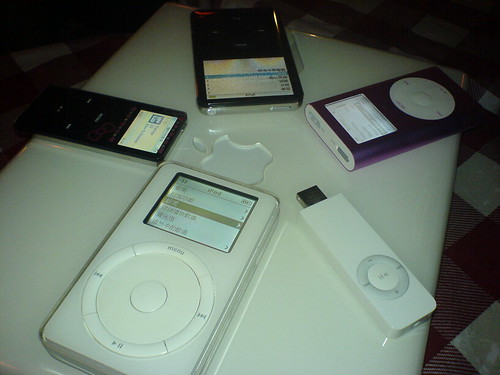 Don’t own an iPod? No problem–other similar-size MP3 players can use the included J-Cup cradle and loop the provided cable into the headphone jack. In fact, you can plug anything with a headphone or line-out jack into the Klipsch iGroove, even if it doesn’t fit the cradle. The speaker runs off the included AC power supply and charges docked iPods as well.

We started our evaluations in earnest with some Simon and Garfunkel‘s tunes, and the Klipsch iGroove sounded pleasantly natural. Their soaring vocals, the guitars, and the band on the Bridge over Troubled Water album sounded great. The Klipsch iGroove is just 15 inches wide, so stereo separation isn’t its strong suit. In small bedrooms or kitchens, the Klipsch iGroove will play reasonably loud, but it’s not exactly a party animal. That said, considering its modest dimensions, the Klipsch iGroove generates surprisingly satisfying bass without exaggerated boominess or thickening.