Save Stargate for Pierre Bernard 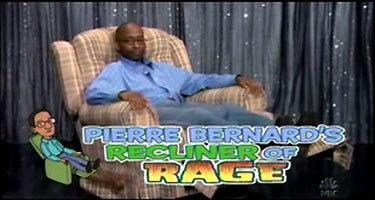 Pierre Bernard from Late Night with Conan O’Brien is comfortable and furious about the cancellation of Stargate SG-1!

Pierre, has gained notoriety among Stargate fans for repeatedly defending the Sci-Fi series on Late Night with Conan O’Brien as well as appearing in several episodes of Stargate SG-1 including the 200th episode as a zombie.

Here’s the transcript of Pierre’s rant:

“Recently I’ve been spending even more time than usual online. Partly because I’ve been collecting anime action figures by Monsieur-Bome on eBay, but mostly because of all the opinions I’ve been posting in the SG1 newsgroup on Yahoo.

Stargate is by far my favourite TV show, so you can imagine how stunned I was when I discovered on August 19th at 10.23am that SCI FI network was cancelling it.

The news was so devastating that I became light-headed and I prayed that it was all just a horrible night’s dream. I even took one of the vicodin’s I had been prescribed after my recent kidney stone surgery, but even that couldn’t ease my pain.

I soon found out that a SCI FI Channel executive named MARK STERN was largely responsible for cancelling Stargate. He immediately went to the top of my enemies list.

You see, Stargate SG-1 had been my favourite television show. It also served as the crown jewel in my Friday night SCI FI Channel lineup, which also included Stargate Atlantis and Battlestar Galactica.

The glorious lineup was made all the more compelling by the presence of actresses Amanda Tapping, Grace Park, Rachel Luttrell, who together form my holy trinity of fantasy females.

Upgrade Your iPod Sound With The Klipsch iGroove
Next Post:You’re, um, fired; Trump exec Kepcher gets the axe