Largest Hand in the World

Lui Hua can’t play video games or the guitar… at least not yet. Why? He suffers from a rare condition known as macrodactyly. When he was hospitalized in Shanghai last month, his left thumb measured 10.2 inches and his index finger measured close to 12. 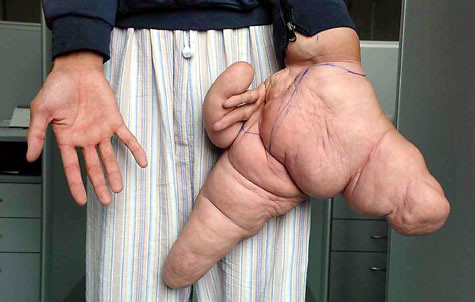 From The Shanghai Daily:

“It was the biggest hand in the world,” said Chen Zuliang, a hospital official. “Liu’s fingers stopped growing in recent years so plastic surgery was at last possible to correct the malformation.”

On July 20 surgeons undertook a seven-hour operation to reduce the size of Liu’s fingers and thumb. Doctors removed 11 pounds of flesh and bone in the procedure. A second surgery is scheduled to take place. Enlarged limbs can be caused by a number of medical conditions. Lymphedema is perhaps the most common cause and results in some extraordinarily enlarged limbs.