Line Rider, the popular drawing game, is now available for the iPhone and iPod Touch for $2.99 in the iTunes App Store.

The game allows you to draw a landscape with a simple pencil tool, creating ramps, hills and jumps. Then you test out your landscape by sending a boy on a sled down the hill, until he wipes out.

The web version of Line Rider has attracted million of players and created a cult following since its debut in September 2006.

According to game developer inXile, the iPhone/iPod Touch version of Line Rider also includes a “movie” mode for players to record tracks, and an upload feature so you can share tracks online.

“In just the first day Line Rider is in the top 10 of paid applications on iTunes,” said Brian Fargo, chief executive officer of inXile. “Our strong and vocal audience has been asking for an iPhone/iPod Touch version of Line Rider ever since the touch interface was introduced… Line Rider is a natural fit for the iPhone as mobile users will be able to share their tracks and ride the lines almost anywhere now.” 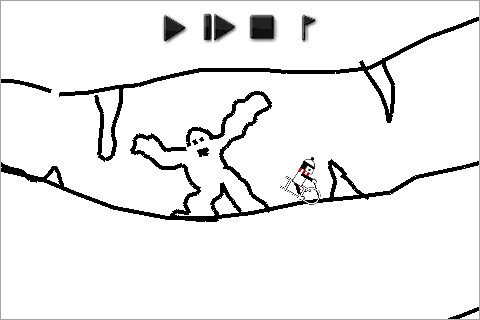