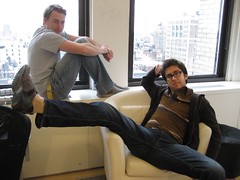 In our favorite episode titled “Lunch Meeting,” [see video below] Jake tries to have a serious meeting with Amir at work. However, Amir insists on ordering lunch before the meeting because he’s more productive when he has food in him. In fact, Amir is so hungry, that he considers it a hunger emergency and dials 911. We won’t give away the rest of the episode, just watch Lunch Meeting to see what Jake & Amir are all about.

The Lunch Meeting episode is a cult favorite and was even spoofed by the PopSiren girls at Revision3.