A drowning 375-pound bear was rescued from the Gulf of Mexico after fleeing from a neighborhood into the surf.

Florida Fish and Wildlife Conservation Commission biologists said the large bear was spotted in a neighborhood near Apalachicola in the Panhandle over the weekend. 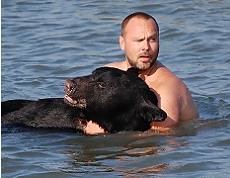 The bear was hit with a tranquilizer dart but managed to escape and bolt into the Gulf of Mexico before he was sedated.

As the tranquilizer drugs took effect, the bear began to drown in the Gulf.

However, biologist Adam Warwick jumped in to keep the bear from drowning.

Warwick managed to get the bear to shore, and then a backhoe operator helped load the animal to a truck.

The bear was relocated to Osceola National Forest near Lake City.

Watch Local 6 News for more on this story.

FacebookTweetPinLinkedIn
Tag: saved
Previous Post:How to Reduce Your Dependency on Google:
Next Post:All Aboard the Train that Never Stops!