You are here: Home / Learn / Business / Advertising / TODAY Show Launches ‘Where In The World Is Matt Lauer?’ Web Games

TODAY Show Launches ‘Where In The World Is Matt Lauer?’ Web Games

The popular TODAY Show franchise 'Where in the World Is Matt Lauer?' now has its own gaming microsite. It's a great monetized marketing effort and I thought it deserved a closer look.

In 1998, the TODAY Show started sending co-host Matt Lauer to far off locations like Mt. Everest and Machu Picchu, for a feature on the show called ‘Where in the World Is Matt Lauer?‘ But this week, NBC decided to send Matt Lauer somewhere he’d never been before… a microsite. In a clever mashup of entertainment and promotion, Matt Lauer now has his own sponsored interactive gaming site (followmatt.com). It’s a great monetized marketing effort and I thought this Matt Lauer microsite deserved a closer look.

“Where In The World Is Matt Lauer?” Microsite

Using a fun object-based interface, the site encourages users to explore Matt’s possessions on his desk. You can watch clips on his iPod Video, check out his car keys (sponsored by Hyundai), download themed ringtones from his mobile phone, and see all of the places Matt has traveled to by opening up his passport. 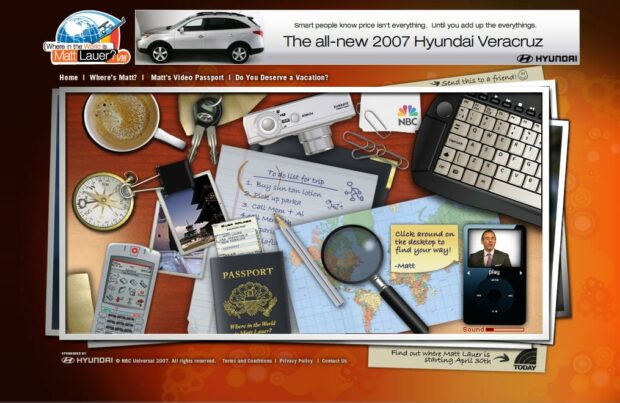 “This daypart is something we’ve been pursuing for a while,” said Joel Ewanick, vice president for marketing at Hyundai Motor America. Being a part of TV morning news is important to him, but he continued, “it’s hard to find something you can ‘own.'”

Visitors can also use Matt Lauer’s digital camera to upload a brief video clip explaining why they deserve a vacation. Apparently, the best sob story wins a free vacation.

By far, the best part of the ‘Where In The World Is Matt Lauer?’ microsite is the “Where’s Matt?” game. It’s like an interactive version of the children’s book “Where’s Waldo?” Matt randomly gets inserted into different exotic locations and you have to find him. 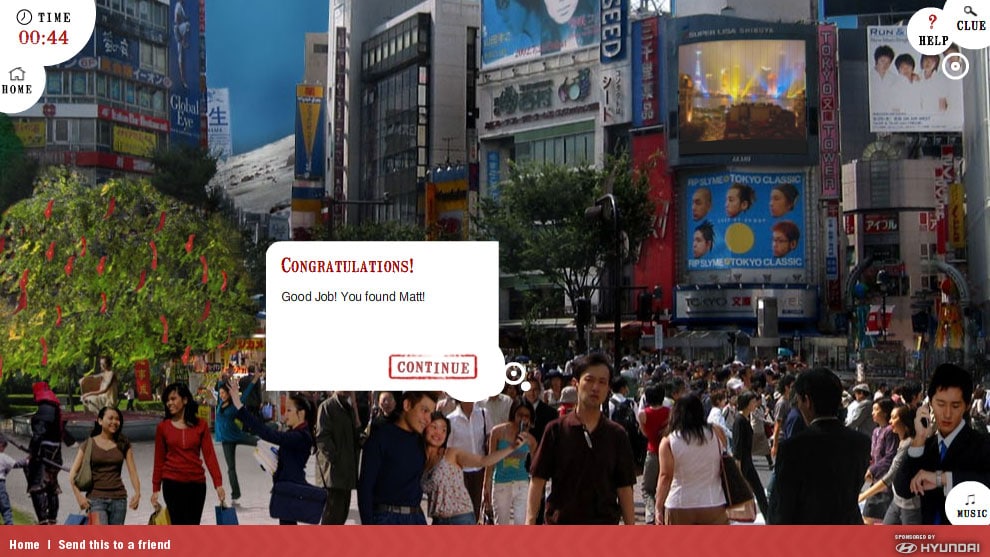 Play and try to get your name listed in the top 10. When I last played the game someone named “Imus Sucks” was in 10th place. Obviously a reference to the radio host who recently made racist comments about the Reuters University women’s basketball team.

Overall, the online experience is great. However, the execution of this site’s design feels a little disjointed. You can tell that multiple companies created the games. Several components of the site launch in separate windows making the experience feel less contained. However, the site really does a nice job of pushing Matt Lauer’s celebrity brand and attracting more interest in the TODAY Show.

The ‘Where In The World Is Matt Lauer?’ microsite is part of a bigger strategy to create monetizable promotional off-air experiences for the TODAY Show. “Digital is something we’re all trying to figure out, how to make it work and how to make money on it,” said Frank Radice, SVP of Marketing and Promotion for NBC News (Editor’s note: Radice is an occasional MethodShop contributor). It’s likely the show tries similar stunts with its other hosts Ann Curry, Al Roker and Meredith Vieira soon.


Don’t give a crap about a free vacation or ringtones? Me either. But at the very least check out the “Where’s Matt?” game and try to get your name in the top 10. I did. Just once.