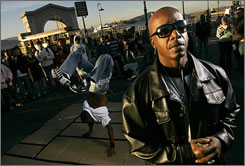 MC Hammer hasn’t topped the music charts since the early 1990s, but the former rap star says he has another hit in him — only this time around he’ll produce it as a Silicon Valley entrepreneur.

Hammer, whose real name is Stanley Burrell, is choreographing a new career as co-founder and chief strategy officer of Menlo Park-based DanceJam.com.

The website, scheduled to debut in mid-January, will try to upstage YouTube and become the Internet’s hub for sharing and watching dance videos. DanceJam then hopes to make money by grabbing a piece of the rapidly growing Internet advertising market, which is expected to rake in $27.5 billion in 2008, according to eMarketer.

If the business pans out, DanceJam could help Hammer compensate for losing his fortune when he went bankrupt in 1996 with nearly $14 million in debts.

The bankruptcy was a sobering comedown for Hammer, who parlayed the popularity of his once-ubiquitous song, U Can’t Touch This, to become a pop icon in the early 1990s. Besides becoming a fixture on MTV, Hammer appeared on kids’ lunch boxes and even had his own action figure.

Although Hammer isn’t churning out best-selling records any longer, everyone still seems to know his name. Even children born after his downfall are familiar with his music because U Can’t Touch This still gets played in TV shows and movies.

But Hammer’s involvement in DanceJam has more to do with his technological savvy than his celebrity, said Ron Conway, a longtime Silicon Valley investor who is part of a small group that provided DanceJam with $1 million in start-up funds.

“I expect him to integrate all his knowledge into this website,” said Conway, who befriended Hammer at a baseball game seven years ago and has been tutoring him in the ways of technology ever since. “He is the lightning rod for this whole thing.”

Hammer, 45, started poking around Silicon Valley while he was still selling millions of records. He often hung out at computer makers like Silicon Graphics and Apple, hoping to learn more about how technology might help his music career.

“There is no high-tech lingo or business strategy that you can talk that is above my head,” Hammer boasted during an interview. “I breathe this stuff.”

Hammer’s entrepreneurial roots date back to the 1980s when he began recording songs with financial help from a few Oakland Athletics, where he once worked as a ball boy. His nickname came from his resemblance to the former home run king, Hammerin’ Hank Aaron.

Without the support of a major music label, Hammer built a loyal fan base by hitting the streets and selling his early recordings out of a car.

His success in grass roots marketing prompted Salesforce.com to call on Hammer for advice in its early days. The company wanted to raise awareness about its online software service without paying a lot for traditional advertising, said Marc Benioff, Salesforce.com’s chief executive officer.