While attending the 2008 Personal Democracy Forum in New York City today, we got to spend some time with Gary from Meetup.com.

Meetup.com is a networking portal that (based on what happened here yesterday John McCain will probably never use) helps organize face-to-face group meetings of people with common interests. The site is very easy to use. Users just enter their ZIP code and search for topic they want to meet about. The website then helps them find a group and arrange meeting times and places. 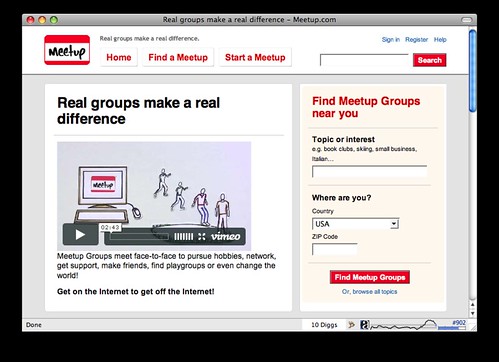 So who what kind of groups are on Meetup.com? The groups vary from Knitting clubs and Britpop fans (see image below) to Ron Paul supporters. 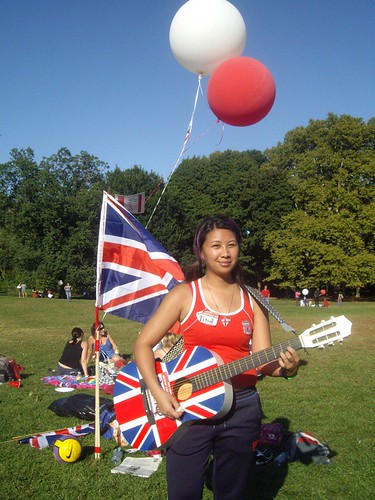 Why is Meetup.com here at the Personal Democracy Forum conference (#pdf2008)? Because local groups are powerful… especially in politics.

In 2004, the Howard Dean U.S. presidential campaign was able to quickly mobilize thousands of supporters using Meetup.com. More recently, former 2008 US Presidential hopeful Ron Paul was able to take advantage of Meetup’s services. Ron Paul still has over 97k members on the site and over 1,500 global groups. Why? Once organized, groups can reorganize themselves, change leadership and even evolve their focus. For example, after Ron Paul’s 2008 bid for President ended, his supporters transitioned into “Ron Paul’s Campaign for Liberty” and were able to continue promoting awareness around issues that the group members had in common.

When Meetup first launched in 2002, the site organizers first tried to arrange meetings of its members in unfamiliar venues and around topics people weren’t entirely interested in meeting about. Since then, Meetup has stepped back and let their users take charge. Meetup just provides tools like iCal and RSS feeds, announcements and step-by-step tutorials for organizers.

So the next time you need to find a group of romance novel fans, iPhone software developers, hikers, poker players, Barack Obama supporters or even lesbians with breast cancer, just head on over to Meetup.com and use their online tools to take your life offline.