After years of poor sales and critical comparisons to the iPod, Microsoft finally pulled the plug on their Zune media player: R.I.P Microsoft Zune.

According to Bloomberg, Microsoft just pulled the plug on their Zune media player today: R.I.P Microsoft Zune (2006-2011). Even though there are no future hardware plans for the Zune product line, Zune functionality will be integrated into the Windows 7 Phone platform. Basically, you’ll be able to access a Zune “app” the same way Apple gives users an iTunes app on the iPhone.

Everyone Hated The Zune… Even Microsoft

Let’s be honest here. The Zune’s death isn’t exactly unexpected. The Zune was largely ignored by both consumers as well as Microsoft.

The Zune never caught on the same way the iPod did. While the iPod was flashily sleek and “cool,” the Zune was boxy, brown and definitely not “cool.” Honestly, it kinda looked like an electronic piece of poop. The Zune’s screen also easily cracked frustrating the few users they had. 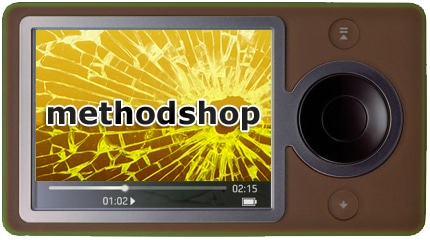 The Zune’s lack of buzz and sales also resulted in Microsoft not making the Zune a priority. Microsoft only really refreshed the Zune’s hardware once in 2009 with the Zune HD. In comparison, Apple has evolved the iPod constantly and made a fortune doing so.

Microsoft has a long history of failures to recognize how their components are all part of the total user experience and how importantaesthetic appeal is to products. Microsoft software is often clunky, confusing to use and full of bugs (that hackers enjoy exploiting).

The Apple iPod wasn’t the first MP3 player on the market. Several smaller companies, including Rio, manufactured great MP3 players before the iPod’s debut in October 2001. Then after the iPod’s commercial success, Microsoft, Diamond, Tascam, and Sony among others all released their own portable MP3 players in an effort to compete with Apple. However, all of these competitors lacked the sleek aesthetic appeal of the iPod. The iPod is cool. It looks cool. The iPod marketing is cool. And It’s fun and easy to use just like Apple’s other products. In contrast, Microsoft’s clunky brown Zune is not cool at all.

Another important factor that separates the Zune and iPod even more in Apple’s favor is user experience. When Microsoft created the Zune, they created a stand-alone product. In comparison, Apple didn’t just launch the iPod, they launched a full user experience with it. The iPod’s companion software, iTunes, connected the user, the device, the content and the software, all together. Steve Jobs had been doing this for years. With the iPod, he just took it to another level.

So, farewell Zune. You won’t be missed by many. In fact, Jim Louderback, CEO of Revision 3, was the only Zune advocate we ever knew. If someone at Apple is reading this, please mail Jim an iPod. He’s probably in mourning right now. What did you think of the Zune? Are you sad Microsoft killed it? Please leave a comment below.

Vampires Come Out to SXSW – The Marketing Genius Behind HBO’s True Blood
Next Post:Tips On How To Organize Your Connections After SXSW Austin