MSNBC.com‘s “Decision ’08 Dashboard,” a one-of-a-kind destination for politics available at politics.msnbc.com, saw traffic skyrocket throughout the Democratic National Convention with more than 67 million page views during the week ending August 30, 2008. 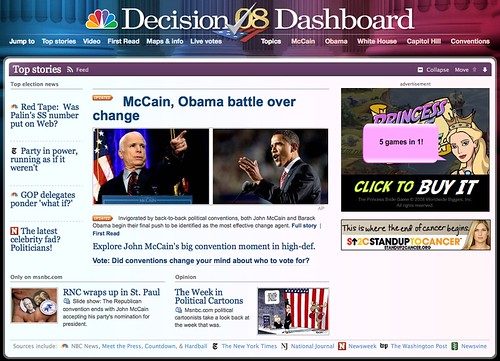 Msnbc.com, the number one Current Events and Global News site, has surged past its competitors and quickly become the web’s premiere destination for the best political news, analysis and video. Of msnbc.com’s 29 million total online video streams for the week ending August 30, 16 million total streams – or 55% – were politics-related.

Consumers turned to the “Decision ’08 Dashboard,” for up-to-the-minute coverage from the convention floor, exclusive multimedia features, live votes, the latest FirstRead blog posts, and next day analysis of the political news. Two of the most popular features on the site were msnbc.com’s special convention slideshow and the new “Map & Info” section, which presents users with the tools to explore rich demographic data about the nation or any state.

The “Decision ’08 Dashboard” empowers consumers and allows them to construct their own news experience. The visually distinctive design allows them to customize the page by arranging sections as they prefer. During the convention, traffic to the “Decision ’08 Dashboard” surged to 80% higher than the weekly average, making politics the number one category across the site for the week ending August 30, 2008.

On August 29, msnbc.com, named the number one news site by Nielsen Online, beat CNN.com in page views, unique users, and online video streams. According to CNN.com, August 29 “represented one of the year’s highest traffic days for CNN.com, as well as its highest traffic day during the week of the Democratic National Convention.”