NBC Universal on Wednesday released new figures showing how its programming is being consumed on multiple platforms.

NBC called its new metric the TAMi, or Total Audience Measurement Index. The network first sent out TAMis to show how the Olympics were viewed on multiple platforms. Now it plans to issue TAMi numbers on a daily basis for some of its prime-time broadcast network programming.

The figures show that while the overwhelming consumption of NBC shows is on television, different programs attract different levels of interest online, via downloads on VOD and on mobile.

For example, “Heroes,” which attracts a young audience, racked up 24.5 million exposures on television for its season opener, and tacked on another 8.1 million through streaming video, 58,886 via downloads, 44,167 on VOD and 26,162 via mobile for a total of 32.8 million.

NBC notes that earlier episodes have been available longer on alternative platforms and have had a chance to accumulate more exposures. Some data doesn’t come in until time has elapsed, adding to difficulty in tracking show performance from week to week.

The premiere of “Heroes” was also two hours long, increasing the exposures it generated.

In all, NBC released TAMis for 11 of its shows. The network plans to expand that as the season goes on. 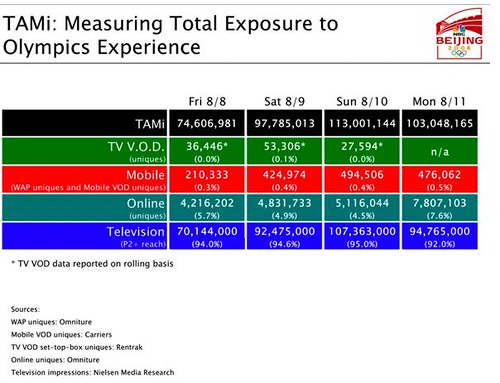 FacebookTweetPinLinkedIn
Tag: NBC, tami
Previous Post:After 30 Years, a Film Returns to a Harrowing Time in San Francisco
Next Post:Have You Seen This? Retro Soda Display From A 1984 Grocery Store