How does the Samsung Galaxy Tab 4 NOOK 7.0 compare to the Nook Glowlight, their previous generation model? Let's do a detailed eBook reader comparison and find out.

Barnes & Noble‘s e-reader, the NOOK, is adored by avid book readers. But the company has been struggling to keep up with a wide range of competitors ranging from Amazon’s Kindle to Apple‘s iPad. However, in August 2014, Barnes & Noble released a new model NOOK in a partnership with global electronics powerhouse, Samsung. The result is a sharp and functional e-reader tablet hybrid, the Samsung Galaxy Tab NOOK.

How does the Samsung Galaxy Tab 4 NOOK 7.0 compare to the Nook Glowlight, their previous generation model? Let’s do a detailed eBook reader comparison and find out. 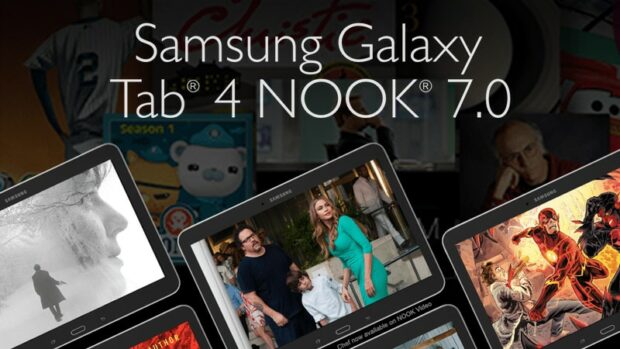 Comparing screens between various tablets and e-readers isn’t just about size. It’s about brightness, color, and resolution. The Samsung NOOK Tab has a 7-inch screen, while the NOOK Glowlight comes in with an odd proportion resulting in a screen around 6 inches. As far as colors, the Glowlight is an “e-ink” reader, it only has 2 colors, black and white, and is designed to look like paper.

The NOOK Galaxy Tab models, however, all boast bright colors and strong backlights with full control, allowing the glow to be adjusted to preferred levels. While some reviewers have claimed that the NOOK HD has the best resolution, a 1440 x 900 screen at 243 PPI, the difference between it and the Tab 4 NOOK is more or less negligible. The Samsung eReader is barely smaller at 216 PPI, making the resolution disparity between the two units below 12 percent.

Which eBook Reader Has The Best Battery Life?

The Glowlight has fantastic battery life. But how long will it last with a single charge? The Barnes & Noble web page for the Glowlight claims the e-reader can run for up to 8 weeks without charging. Yes, it’s possible, but make sure you read the fine print. The Glowlight will run an extremely long time, make no mistake, but the 8-week lifespan is contingent on the following:

That comes out to about 30 hours per charge, 15 if you leave WiFi on, and presumably around 8 or 9 if you turn the brightness up. Meanwhile, one reviewer found that the Galaxy NOOK can run for over 10 hours on a single charge, with WiFi running. Not only is that notably higher performance than the Glowlight — but the Tab 4 NOOK is also in color — it’s actually two hours longer than the current device standard of eight and a half hours. 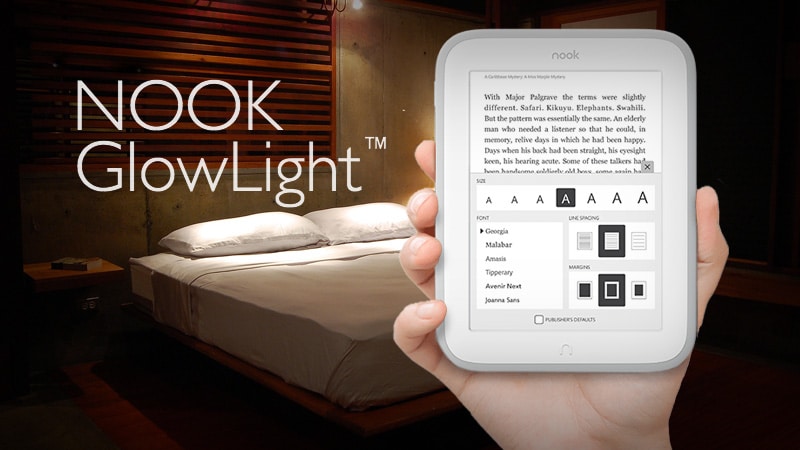 There’s no denying the Glowlight wins this round: coming in at less than seven ounces, this is one of the lightest e-readers ever. Of course, it’s also the smallest. The NOOK HD and NOOK Tablet are around 11 and 14 ounces respectively, with the Tab 4 NOOK coming in just under 10 ounces. However, since the Samsung NOOK boasts the same screen size as both other color e-readers under the Barnes & Noble banner, it’s definitely the best use of the real estate.

This is one area where numbers speak loudest, and in that case, the Tab 4 NOOK wins. Running Android 4.4, it’s still a bit behind the curve of Android devices, but it’s leagues ahead of most other NOOK devices. The NOOK HD operates on Android 4.0, close but lacking some key security and speed updates, while both the NOOK Tablet and the Glowlight run of versions of the 2.0, putting them well behind the bar regardless of the two years separating their respective release dates.

Other Uses For eReaders

Once again, this is where Samsung’s new toy shines brightest; because this tablet was originally designed without NOOK functionality, the various apps and services were constructed on top of the existing device framework while leaving the tablet functions completely intact. The NOOK Tablet can multitask a bit, as most e-readers can, but the Tab 4 NOOK is the only one designed to give you the option to use it however works better for you. Also, since the Galaxy Tab 4 came with the ability to run two apps side by side in a single screen, the NOOK version offers the same functionality, meaning you can read a book for class or in preparation for a seminar and play Angry Birds at the same time.

Which eBook Reader Is The Best?

While your personal needs make it impossible to declare one NOOK better than the other, research shows that form and function are notably improved in the Tab 4 NOOK over the previous versions. Samsung’s NOOK offers everything a device manufactured by Barnes & Noble could, along with the speed, security, and trust of a Samsung device. Whether you believe eReaders should be used for business or pleasure, the Samsung Galaxy Tab 4 NOOK is a powerful addition to the NOOK family.

But because the NOOK Glowlight is only used for reading, you won’t have to worry about other people in the household, especially the kids, borrowing it to update Facebook or watch “Frozen.” If you just want to read, without the distraction of other features found on a tablet or smartphone, or having to deal with other people trying to borrow your device, then the Glowlight is for you.

But if you want an e-reader with the full feature set of a tablet, then the Samsung Galaxy Tab 4 NOOK is the way to go.