An Open Letter to Angry iPhone Owners from Steve Jobs

After lowering the price of the iPhone by $200, angry iPhone users started contacting Apple CEP Steve Jobs. They wanted a rebate... and they got it.

This week Apple announced new iPods and lowered the iPhone price by $200. But what if you were one of the millions of people who bought an iPhone 2 months ago? You’d probably be a little-pissed off right? Apple CEO, Steve Jobs, got so many emails from angry iPhone customers that he wrote an open letter on the Apple website today. The letter says that every customer who purchased an iPhone from either Apple or AT&T will receive a $100 Apple store credit.

Offering a store credit rebate is a brilliant move by Apple. It will placate the angry early iPhone adopters who are feeling cheated, still, keep the money in Apple’s pocket and generate lots of press like this article. 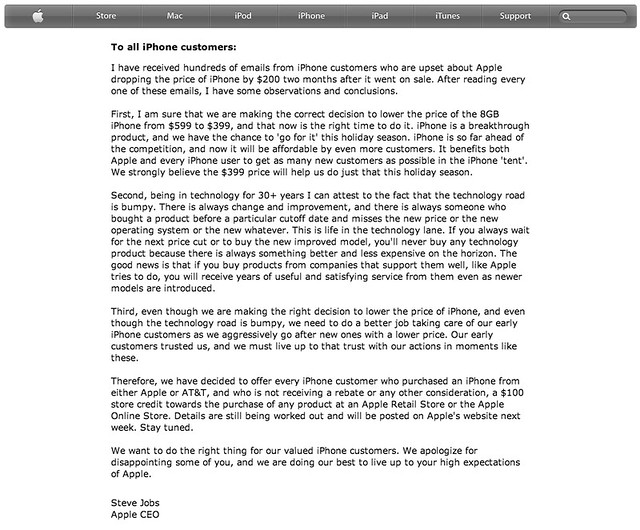 Once again Apple has proven why they are so loved by their fan base. But, hey Steve, shouldn’t it be a $200 store credit?