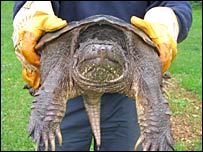 A turtle described as a “submarine killer” has been captured at a country park after nearly two decades of plundering local wildlife.
The snapping turtle, which is native to America, was first spotted by head warden Dennis Manning 17 years ago. 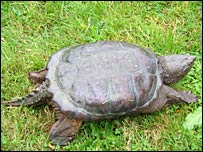 It is now being moved from Caldicot, Monmouthshire, to the Tortoise Trust rescue sanctuary in west Wales.

The freshwater turtle, which has been named Snappy by wardens, was thought to have been released at the park by owners who did not want it.

Known as an aggressive species, it has a long spiky tail, claws and a sharp beak and “will eat anything it can catch”.

The turtle is usually found in the wild in the Americas, spreading from Canada to Florida and as far south as Ecuador.

“It is like a submarine killer,” said Mr Manning. “It will be under the water like a submarine and when it spots something it wants to eat, it will shoot its neck out really fast and drag it under.

“It doesn’t have teeth, just a very sharp beak. I had been wondering why our moor-hen and duck population had been on the decrease,” he laughed.

Mr Manning first saw the creature when it had been dug up in a mechanical digger.

“He was excavated by the digger and so we put him in a bucket and put him back,” he said. 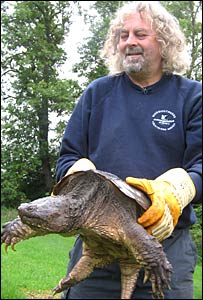