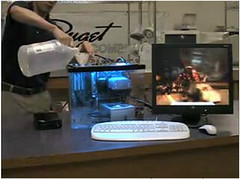 As computers get faster, they get hotter. Hardware manufactures do their best to cool things down like adding heatsyncs and small fans to internal components, likes high-end video cards and processor upgrades. But eventually heat will become an issue and you’ll have to try reducing heat by adding internal fans or some liquid cooled parts…

Or you could just submerge your entire computer inside an aquarium tank filled with mineral oil.

I’m not kidding. You seriously have to see this video to believe it. The guys at Puget Custom Computers actually assemble a computer inside an aquarium and then fill it with mineral oil. Not only does the PC look stylish, but heat no longer becomes an issue because the entire computer is liquid cooled! They call it Mineral Oil Submersion Cooling.

There’s a surprise at the end of the video. I won’t spoil it. You’ll just have to watch it and see.

If you want to copy this video off of YouTube and watch it on your iPhone or Apple TV then check out this tutorial: How to Copy Files Off YouTube.