Prehistoric land under the sea

It’s a landscape no human has even seen. And those who live right beside it had no idea it even existed.

Deep below the sea, off the north coast of Northern Ireland, a dramatic geological mystery has been discovered.

Huge cliffs, vast basins and plateaus, a lake and even rivers have been found. But so far no-one is certain what caused them to end up like this deep under the sea.

The discovery was made when the seabed was being surveyed to update old Admiralty charts, drawn up in the mid-1800s.

Funded by the European Union and backed by the UK’s Maritime and Coastguard Agency, a survey vessel has been scanning the seabed along most of the north coast of Ireland, including the seabed north of Rathlin Island.

Huge cliffs and vast basins were revealed in the survey

Most of the bottom was largely flat and unremarkable, but as the survey headed east it suddenly came across an unexpected landscape.

For the first time marine biologists could understand what was down there and the scale of it all.

“They can go out on land and see where their habitats are. Underwater we’ve never had that luxury. 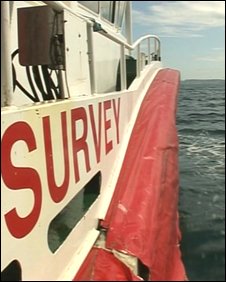 “On a dive you can only see about 15 metres so it’s like operating in fog. Now, with this survey, we can report on the true extent of the features.

“For the European Habitat Directive, we have to report the extent of our reefs and sandbanks. This will help with the whole concept of marine spatial planning.

“So, if someone wants to put in renewable energy or extract aggregate, we now have a blueprint and can see how they’re going to interact and if it’s sustainable.”

Eureka’s Smart Home S.A.R.A.H. is on Twitter
Next Post:Amazon: The Avis of digital music