Do you manage a Twitter account for your company? The next time you get the urge to improvise or to tweet something humorous, you might want to think twice. Your tweet could get you fired. Earlier this month, a Vodaphone employee named Müller Tamás unfortunately found this out the hard way. Tamás worked in Vodaphone‘s marketing department in Hungry. His job was to update the company’s Twitter account and monitor Twitter for relevant trends. 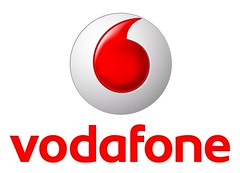 On December 4th, T-Mobile, a major competitor to Vodaphone in Hungry, was experiencing severe network outages. T-Mobile notified their customers of the outage by tweeting the following on the company’s @tmobilehungary account:

The update did little to reassure T-Mobile customers. Instead, it only fueled their anger and Twitter exploded with T-Mobile related complaints. @tmobilehungary then frustratingly tweeted a second time:

“There will be an official statement (released) about the network problem. Please be patient!”

Tamás was monitoring the social media reaction to T-Mobile’s outage carefully and saw an opportunity to promote Vodaphone. Tamás thought it would be clever to retweet T-Mobile’s last message about their network problems and encourage T-Mobile users to switch carriers. 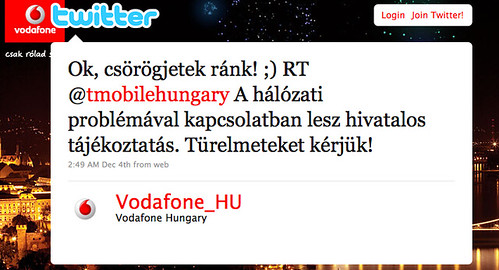 “OK, give us a ring! 😉 RT @tmobilehungary There will be an official statement about the network problem. Please be patient!”

Unfortunately the tweet did not go over well with Vodaphone management. Vodaphone was extremely unhappy with his tweet, and their communications director, János Suba, released the following statement: “The employee’s behavior goes against fair competition and we decided the action called for sacking.” Yep, Tamás was fired.

It won’t help Tamás pay the bills next month, but users on other social sites like Digg.com are praising him with support and bashing Vodaphone.

“Wow, that really is extreme. People that read it probably found it funny and bought humour to the situation.” – LukeZbihlyj

“thats just dumb……how strict are the working conditions there that you cant even send out a tiny humorous joke?” – Withitalready

“Seems like companies want it both ways. They want to be hip to social media but they still want to tightly control the message. Basically, the guy got fired for doing his job.” – yellowsnowcone

Vodaphone has a thing or two to learn about social media. By firing Tamás, Vodaphone just made the situation worse. The slightly sarcastic tweet by Tamás would have mostly gone unnoticed. Perhaps a slap on the wrist would have been more appropiate. But now, Vodaphone has to deal with a PR crisis they made worse by trying to fix it [thenextweb].

Put a HD Camera in Your Pocket with the Flip Mino HD
Next Post:Amazon Kindle 2 Global Wireless Edition Review (2009)