Serenity Sequel on the Horizon?

Serenity was a massive flop in theaters, but could big DVD sales for the box office bombed film be enough to resurrect the franchise? Alan Tudyk thinks so and he’s excited about it, even if his character is dead.

According to the guys over at Moviehole, Tudyk told them that a sequel could be happening. Alan says, NBC Universal “had to put [the new DVD] out because they’ve been selling out of the other one and so Universal’s like ‘So, let’s do another one’. And now… there’s now a chance there’s going to be another movie.” 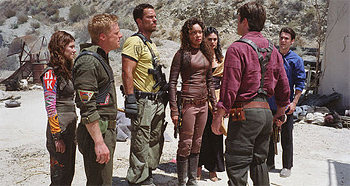 With the film’s box office numbers as bad as they were, it might make sense for the studio to push a sequel out the door as a direct-to-DVD sequel. If you’re a fan of Serenity you’ll probably be happy to have the crew back in just about any form, I just hope if it comes to that it doesn’t end up a low budget feature that sacrificed quality in the name of saving a buck. Come on, that’s usually what happens with these things. On the other hand, Serenity started out as a TV series called Firefly. If franchise creator Joss Whedon can make it work inside a TV budget, he should have no problem doing it on a direct-to-DVD one.