Power, Versatility and Great Video
Sony believes that you should be overwhelmed by DVD performance; not DVD equipment. They deliver DVD excitement in a slim, sleek, stylish package, the perfect way to bring the full performance of DVD, including studio-quality digital pictures and six-speaker surround sound, into your home. The DAV-FX100W DVD Dream System consists of slot-loading 5-disc DVD changer/receiver, front and back floor standing speakers, a center channel speaker and a powered subwoofer. You get a total of 1000 watts of system power. Not only can this system play DVDs and CDs, including your CD-R/RW discs, it can also play the latest Super Audio Compact Discs, for the ultimate in stereo and multi-channel sound quality. And, when you want to hook up to satellite television, there’s a digital input waiting for you so you can enjoy the benefits of digital audio with your digital satellite programming. 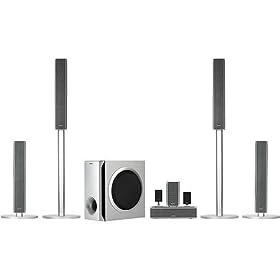 Home Theater… With Wireless
What is the ultimate reference for movie theater sound? It’s the Hollywood dubbing stage, where directors go to evaluate and approve their sound tracks. Now, that sound has been brought home, courtesy of Sony’s Digital Cinema Sound system. These digitally recreated acoustic environments are based on the actual measurements Sony made at acclaimed Hollywood dubbing stages. By reproducing the precise reverberation qualities of these venues, the DAV-FX100W DVD Dream System makes your movies sound exactly the way they were meant to be heard. The wireless rear speakers with DAIT technology allow you to place the audio where it sounds best: you are in control!

Music To Your Ears
Super Audio Compact Disc is the realization of an audiophile’s dream: all the precision of digital reproduction, combined with the warmth and ambiance of analog sound. The secret is Direct Stream Digital encoding. Its one-bit 2.8224 MHz (64fs) sampling is the highest quality sound source available today. DSD one-bit encoding strips away entire classes of distortion that have always characterized the conventional PCM digital sound format used for traditional CDs. It’s nothing less than a quantum leap forward in music resolution. The DAV-FX100W reproduces not only stereo SACDs, but also multi-channel SACDs. You can hear the full glory of full-resolution SACD sound in as many as 5.1 channels.

Digital Decoding
Sony has included Dolby Digital, Dolby Digital EX, dts, dts ES and Dolby Pro Logic II decoding in this system so you have surround sound covered. Dolby Digital and DTS decoding will surround you with 5.1 separate channels of digital sound for sound quality that analog systems can’t match. You are enveloped with completely separate channels for Left, Center, Right, Left Surround, Right Surround and the special “.1” channel just for bass. Suddenly, movies have the same excitement and impact as in the theater. Bass is stronger and closer to the director’s original intent. Dolby Digital EX adds an extra channel (a matrixed surround back channel) to the 5.1 discrete channels of Dolby Digital. dts ES improves 360-degree localization and spatial expression. The DAV-FX100W also incorporates Dolby Pro Logic II decoding. Dolby Pro Logic II expands upon 2 to 4 channel sound formats, transforming them into pseudo six channel surround sound. So, you’ll be ready to hear the best from hundreds of VHS Hi-Fi movie releases, plus a wide range of digital satellite programs, TV sports, drama and movie broadcasts. Even your stereo music will take on a whole new sound thanks to Dolby Pro Logic II processing!

A Bit More Detail
The DAV-FX100W DVD Dream System gives you great movie and music playback with every disc. This high-tech home theater system features sophisticated audio and video capabilities that will enhance your home entertainment: fantastic near-High-Definition DVD images, plus wireless rear speaker technology for powerful surround sound and easy setup. The DAV-FX100W can upconvert standard DVD signals, upgrading them to dynamic near-HD resolution. It sends these pure, all-digital signals to any TV with a High-Definition Multimedia Interface (HDMI) input. HDMI is a high-quality connection known for delivering superior picture quality. You’ll notice the added detail and clarity in all your DVDs. Plus, you enjoy rich, enveloping surround sound without running speaker cable all the way to the back of your room. Using a small transmitter, the DAV-FX100W sends uncompressed digital audio signals through the air to a small rear amplifier. You simply connect this amplifier to the right and left rear speakers to get beautiful, dynamic sound with easier hookup and less clutter. This system is a movie lovers Dream System… literally.

This product is available on Amazon.