Tricycling Is Good for the Environment

It’s time for Colin Beavan to take his daughter to school, and it’s not as easy as hopping in the car and dropping her off a few blocks away.

Beaven is the “No Impact Man.” He’s 10 months into an experiment in self-sacrifice that he says is all about helping the environment.

For an entire year, Beavan and his family are swearing off all modern conveniences and living impact-free on the environment.

In their Manhattan apartment, there’s no electricity. That means no lights and no television. They’re buying nothing new, not even toilet paper, consuming only local food.

Beavan’s latest challenge? Transportation. His solution is a tricycle, all handmade from recycled parts.

He’s using it to move his family of three around New York, and he’s burning no fossil fuel.

It is like a sport utility vehicle, but of course it burns no gas at all. It’s fueled only by pedal power, and that’s the whole point. The only thing their transportation is burning is muscle and sweat.

“To ride a bike in New York is like being an activist, especially in a city like this,” he said.

And he claims it’s faster than a cab, bus or subway.

“I am all in favor of public transpiration, but it still uses no carbon to power itself and no carbon in the atmosphere with bikes,” Beaven said.

The numbers, Beavan says, back them up. A new study from the U.S. Census Bureau shows that just 1 percent of all trips in the United States are done by bike. Boosting that number just one-half percent would save 462 million gallons of gas a year and cut carbon emissions that contribute to global warming.

But the Beavans say there are other benefits as well.

“I definitely feel the family is more about together because of this,” said Colin’s wife, Michelle Beavan. 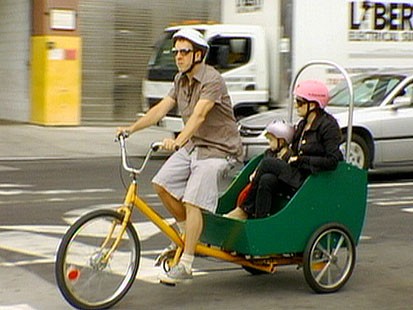