Good news for Tron movie fans. Director Joseph Kosinski is in final negotiations to direct a sequel to the 1982 cult movie classic.

Good news for Tron movie fans. According to the Hollywood Reporter, commercial director Joseph Kosinski is in final negotiations to direct a sequel to the 1982 cult movie classic. Steven Lisberger, who co-wrote and directed the original film, has signed on as a producer. 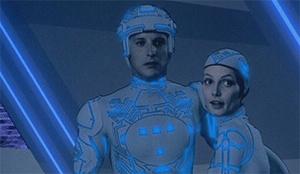 Kosinski, who last month signed on to the remake of “Logan’s Run” for Warner Brothers, will oversee the visual development of the project and have input on the script, which is being written by “Lost” scribes Eddie Kitsis and Adam Horowitz. Story details are being kept secret.

In case you didn’t see the original film 25 years ago, here’s a recap. Tron is about a computer programmer who gets sucked into a virtual world. He then is forced to fight in his own video games. In 1982, the special effects used in Tron were groundbreaking. It was the first movie to use computer generated images (CGI) in conjunction with live action. Sources also say that visual effects personnel, for many of whom Tron was an inspiration to enter the business, are already are jockeying to work on the film.

Before Disney greenlighted Lisberger to make the original film, he had to shot a test reel, financed by the studio, of the deadly Frisbee battle. It looks like Kosinski will have to do the same thing. But this time the studio wants to see a test sequence involving the movie’s Light Cycles. I can see why. The arcade game based on the Light Cycle scene was so popular in the early 1980s that it earned more money than the movie.