Before you flush the toilet, you might want to check the power level in your batteries. You could be flushing away a free source of energy.

In 2005, Scientists in Singapore developed a battery powered by urine. The Scientists were able to produce electric power using liquid as a catalyst thanks to a special mixture of magnesium and carbon inside the batteries. 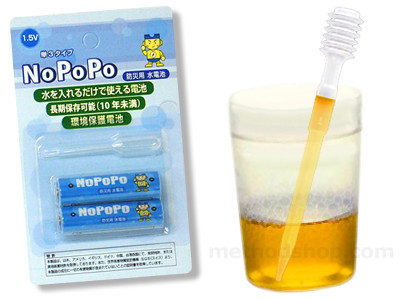 Now, a Japanese company has brought this urine powered battery technology to market with the NoPoPo (Non-Pollution Power) Aqua Batteries. Just use the included plastic pipette to inject urine into the battery chamber. Grossed out by pee? You can also use other types of liquid including beer, apple juice, cola, and saliva and of course urine. When I first heard about the NoPoPo, I thought it might be a joke. Making silly inventions is a popular hobby in Japan called Chingdogu. But the NoPoPo is no joke.

A single urine powered AA battery can power a flashlight for about 20 hours (500 milliamp-hours). Not exactly the most powerful battery on the shelf, but it’s a great start for this environmentally friendly energy technology. The NoPoPo aqua powered batteries are currently only available in both AA and AAA sizes, but the company has future plans to produce all common battery sizes.

Off the top of my head, here are just a few reasons why you should love the NoPoPo:

Unfortunately the NoPoPo can currently only be purchased in Japan. Hopefully one of my Japanese readers will send me some.