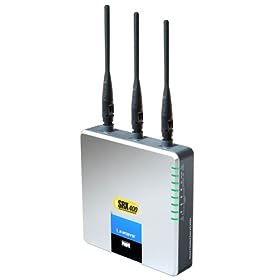 Wish you could double the speed of your wireless router?

One of the features that makes this router so powerful is MIMO, “multiple in, multiple out.” MIMO technology doubles the data rate that this router can transfer by overlaying the signals of two Wireless-G compatible radios. If you take a close look at this router, you will see multiple atenntas along the top. Using this router is like having 2 routers