Hate fingerprints on your iPhone or iPod Touch? Enough to spend $9.90 on some finger condoms? An enterprising company in Austria is selling something called Phone Fingers that prevent smudges and fingerprints on the screens of the iPod Touch and iPhone. 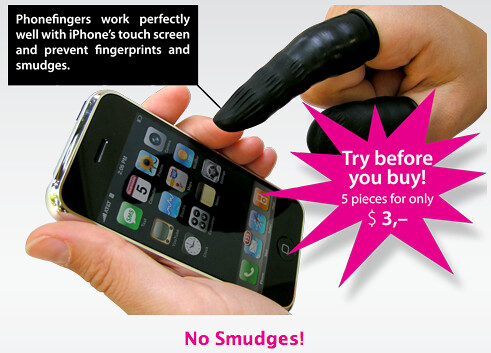 One more thing, the Phone Fingers only come in black and make the user look like they have a severe case of frostbite.

PhoneFingers?! Is This For Real?

Silly product idea, weird choice in color and a silly demo video. The Phone Fingers have all the makings of a gag gift… like the Pet Rock.

Apple’s touchscreen technology works by sensing the electrical fields in your skin. A latex finger condom is an insulator and would prevent the iPhone and iPod Touch from detecting any input from your fingers. The Phone Fingers website even says “This is probably the funniest accessory for the iPhone available!” But elsewhere online, there’s a pretty heated debate going on in the comments. A lot of people initially thought this was a serious product, not a gag gift. If you have a few minutes, it makes for a pretty entertaining read. You can read more about “Phone Fingers” at PhoneFingers.com.