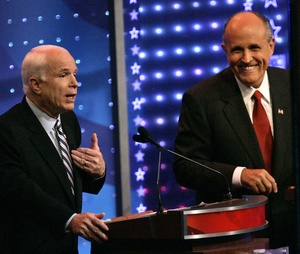 In a sign of just how far politics on the Web has come, Google’s YouTube will co-sponsor the first of six Democratic Party-sanctioned debates of the 2008 race.

The role of presidential debate sponsor, until this election season, has been reserved for mainstream television and print outlets and their Web sites. CNN is the television partner for the debate, scheduled for July 23 in Charleston, S.C.

But the dawn of the YouTube election, as the 2008 contest has been dubbed, in which candidates and Web users fuel political debate with videos, both serious and funny, is changing the definition of mainstream, especially as candidates and parties seek to engage young people.

“It’s really a new day,” Carol Darr, director of the Institute for Politics, Democracy and the Internet at George Washington University, said of YouTube’s role. And, she added, it’s smart marketing – especially for organizers of an early debate – to seek out an audience, and online political activism is especially hot this election cycle.

“You go fishing where the fish are,” she said.

Despite YouTube’s use as a platform for videos that can be irreverent, embarrassing and problematic when they expose candidates’ flip-flops and foibles, Democratic National Committee spokeswoman Karen Finney said the DNC expressly told networks and other potential sponsors that “we’re looking for creative, inventive ways to engage voters.”

Sorry Donald Trump – You’re Fired!
Next Post:Jenna Fischer From NBC’s ‘The Office’ Falls And Breaks Her Back At A New York City Nightclub