Home Entertainment TV & Film Top 30 Office Space Quotes (How Many Do You Know?) 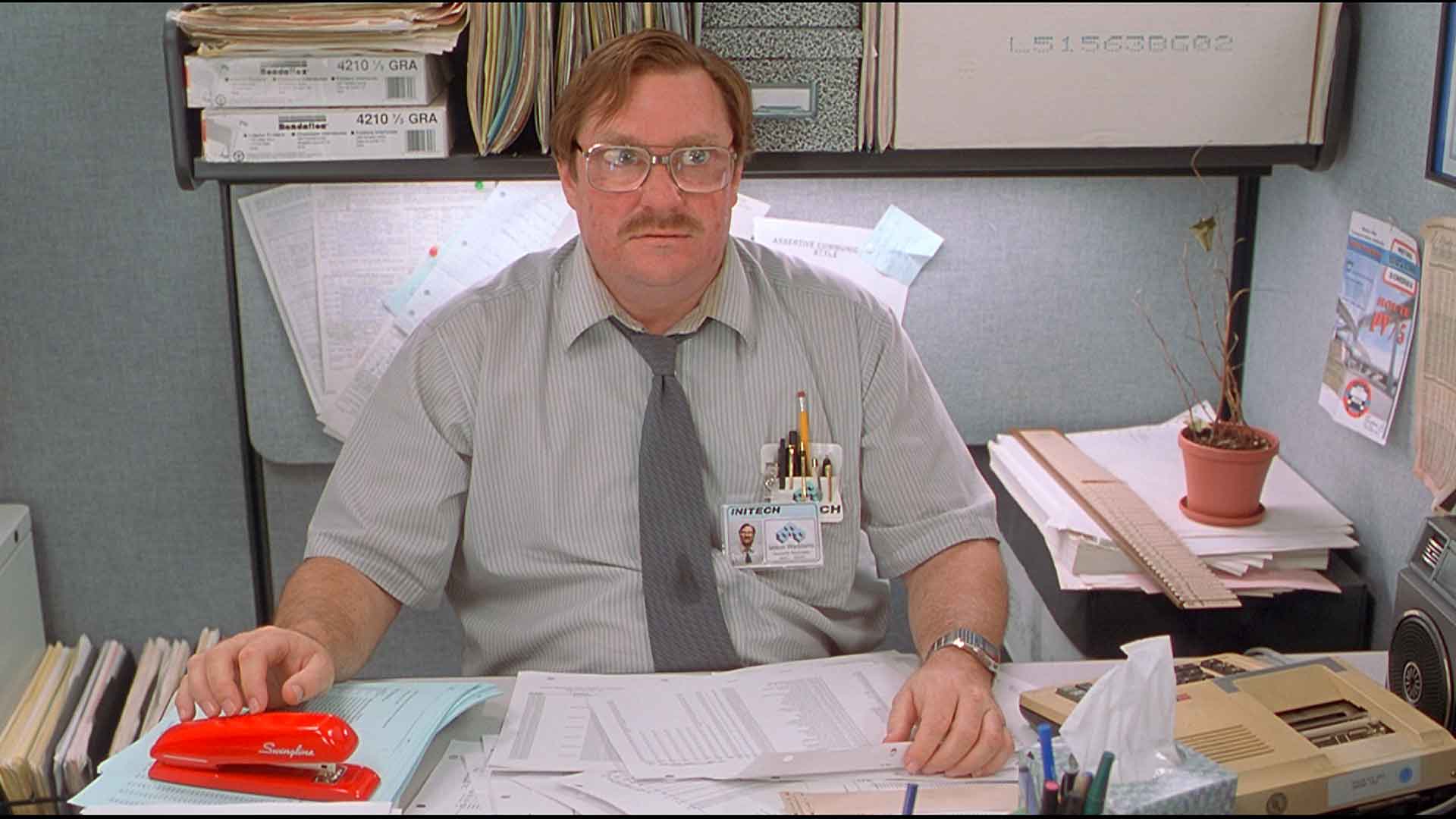 Have you ever had the urge to demolish a temperamental office printer or had to endure a smarmy, condescending boss? If so, the 1999 comedy, Office Space, should hit pretty close to home for you. Director Mike Judge (Beavis and Butt-head) has come up with a spot-on look at what it was like to work in corporate America in the 1990s. The film has a fantastic script and is full of memorable lines. Here are the best Office Space quotes from the movie. How many do you know?

3There Is No Paper Jam!

5The Jump to Conclusions Mat

7Did You See The Memo About The New TPS Reports?

10Walk Us Through A Typical Day

I’d say in a given week I probably only do about fifteen minutes of real, actual, work. #OfficeSpaceQuotes #OfficeSpace

11Upper Management Written All Over Him

13Pound Me In The Ass Prison If things go right I might be showing her my O-face. You know: Oh! Oh! #OfficeSpaceQuotes

16Worst Day of My Life

17Missing “Quite A Bit” Of Work

18What is “Money Laundering”?

19He’s The One Who Sucks

We fixed the glitch. He won’t be receiving a paycheck anymore, so it will just work itself out naturally. #OfficeSpaceQuotes

“It’s not that I’m lazy, it’s that I just don’t care.” #OfficeSpaceQuotes #OfficeSpaceMovie

23A Case Of The Mondays

Uh oh. Sounds like somebody’s got a case of the Mondays. #OfficeSpaceQuotes #OfficeSpaceMovie

24I Used To Be Addicted To Crack

“What am I gonna do with 40 subscriptions to Vibe Magazine?” #OfficeSpaceQuotes #OfficeSpaceMovie 30Set The Building On Fire

Peter (Ron Livingston) spends the day doing dull computer work in a cubicle. He has great friends, like Jennifer Aniston, a waitress at Chotchkie’s, a generic beer-and-burger joint à la Chili’s. And Diedrich Bader (The Drew Carey Show) has a minor but hilarious turn as Peter’s mustached, long-haired, drywall-installin’ neighbor. But even Pete’s friends can’t save him from his job and boring daily routine. He goes home to an apartment sparsely furnished by IKEA and Target. Then starts the day again with a maddening commute. His coworkers in the cube farm are annoying. His boss is a snide, patronizing jerk, and his days are consumed with tedium. In desperation, he turns to career hypnotherapy, but when his hypno-induced relaxation takes hold, there’s no shutting it off. Layoffs are in the air at his corporation, and with two co-workers (both of whom are slated for the chute) he devises a scheme to skim funds from company accounts. The scheme soon snowballs, however, throwing the three into a panic until the unexpected happens and saves the day.

What did you think of this list of Office Space movie quotes? Did we miss any of your favorites? Please let us know in the comments.

Top 30 Office Space Quotes (How Many Do You Know?)

31Do you worship the red stapler?