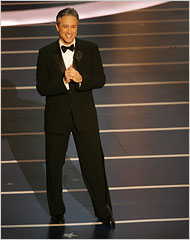 Were they ready or rusty?

Did the writers’ strike give Hollywood a chance to rest and reboot, or did the prolonged break leave those responsible for the 80th annual Academy Awards ceremony out of practice and out of shape?

It was not unreasonable for viewers to hope that the shortened prep time would pump a touch of improvisation and sass into Sunday night’s Oscars — perhaps the jokes would be sharper, the musical numbers and skits a little shorter and the designer gowns a little bolder.

The show, with Jon Stewart as host, seemed less polished than usual but not much more spontaneous. If anything, the evening was weighed down by insecurity: the producers, worried that the strike would not be over in time, commissioned many montages of acceptance speeches and odd moments of Oscar ceremonies past — a streaker, Cher — and then, even after the strike was settled, kept them in as filler.

It was as if they felt they needed an insurance policy against dullness. Yet for the most part, those flashbacks reminded viewers of what they were missing. And showing other actors’ memorable acceptance speeches — especially Cuba Gooding Jr.’s — seemed to leave the new winners self-conscious and subdued.

The producers didn’t help themselves by opening the evening with some of the more boring technical awards; it took more than half an hour to get to a major acting one. That lag was oddly self-defeating, almost as if ABC feared that viewer turnout would not be in its favor and felt compelled to hurry to the end — like Hillary Clinton at the Austin debate delivering a near-valedictory sign-off.

It could have been the aftermath of the strike that darkened the mood, or maybe it was just the lugubrious subject matter of the films nominated for best picture. But there was a cloud over the merriment.

Mr. Stewart used his second chance to play host at the Oscars as a do-over, trying to win back the audience he irritated his first time out, in 2006. The star of Comedy Central’s “Daily Show” had a few amusing lines but clearly didn’t have time to put together a polished and cogent monologue. A Yom Kippur joke about the film “Atonement” fell flat, as did his mockery of Dennis Hopper — not so much unkind as passé: not many viewers remember Mr. Hopper’s psychedelic years.

Mr. Stewart was best when he stuck to “Daily Show” material. He described the Julie Christie movie “Away From Her” as a movie about a woman who forgets her own husband and added that Hillary Clinton called it “the feel-good movie of the year.”

The strike didn’t prompt stylists to loosen their tyrannical hold on starlets and movie stars; Hollywood’s most glamorous women sashayed down the red carpet in monochrome columns of chiffon and silk, looking like backup dancers, not stars.

On the red carpet warm-up show on E! the only person out of step was the actor Gary Busey, who looked a bit addled as he broke protocol and crashed an interview with Ryan Seacrest to bearhug a startled Jennifer Garner, who was so flustered afterward she referred to him as “this man.”

The red-carpet shows are a challenge to ardent American patriots. It’s not just that so many foreign actors won the top awards (No Americans for Gold Men). British actors can make even mindless chatter on E! sound like dialogue from “Gosford Park.” Tom Wilkinson made references to Laurence Olivier; Mr. Seacrest greeted Amy Adams like a sixth grader, grabbing her diaphanous gold mesh purse and holding it over his crotch to suggest that it looked like a codpiece or fig leaf.

Regis Philbin managed ABC’s pregame show a bit better. When George Clooney came up to him, Mr. Philbin gushed that it used to be that “everyone in this town wanted to be Cary Grant, and now they want to be George Clooney.” Mr. Clooney smoothly replied, “That’s because he’s dead.”

It was one of the better lines of the night, and it was uttered long before the Oscars began. Small wonder one of the more apt metaphors for the evening was a series of movie clips of actors waking up from their nightmares screaming. 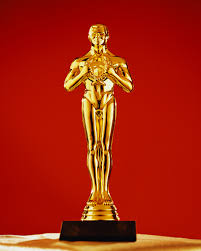