It takes a lot of guts to be a Tornado Chaser. But it also takes a lot of smarts. Most “Tornado Chasers” are scientists or meteorologists who are chasing Tornadoes to gather scientific data and are pretty good about keeping a safe distance from their subjects… this guy, not so much. 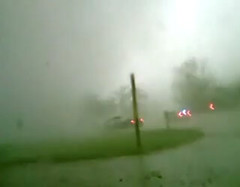 “At first I got within a hundred yards and that was enough, but it was hard to judge its movement and later it caught up to me and passed over the car! This was in Novinger Missouri around 5:50pm 13 MAY 2009. I shouldn’t have followed that cop to pull over…I didn’t see behind me how close it was and it was too late.”

The camera work is a little shaky, but he was driving 100 MPH in the rain with a camera in his hand and a tornado on his ass. Who knows, maybe this amateur Tornado Chaser has a death wish. As you might imagine, the clip is spreading like wildfire on the Internets.