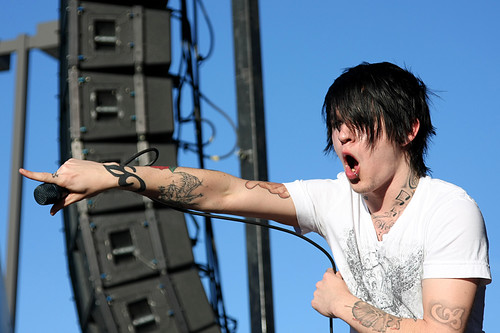 Just wanted to give a little shout out to our friend Kenneth Nixon in Framing Hanley. Their second album, “A Promise to Burn” was just released this week.

Framing Hanley has a lot to prove with this new album. Although, the song “Hear Me Now” from their 2007 album The Moment put them on the map, their cover of Lil Wayne‘s song “Lollipop” became a huge breakthrough hit that has as much potencial to propel them to the next level of stardom as well as destroy them. “Three years later when one song that they are remembering you for is a cover song, it kinda leaves a bad taste in your mouth,” said Nixon in an interview with alternativeaddiction.com. “[Lollipop] did a lot of things for our band, but it was really just something that we were doing for fun.”

After the success of “Lollipop,” the band re-released their debut single “Hear Me Now” and saw very little response. A discouraging reality that many music fans have unknowingly labeled Framing Hanley as “the rock band that covered that Lil Wayne [hip hop] song.”

“It leaves us with something to prove on this record. We are not just a band that covers songs, we want to prove we are a band that writes rock songs that we care about, and that is what we did with this record.”

Some of our favorite tracks on the new album are “You Stupid Girl,” “Back to Go Again,” “Can Always Quit Tomorrow” and “Pretty Faces”.

What about you? Tweet us @methodshop with your thoughts on “A Promise to Burn” and what your favorite songs are.