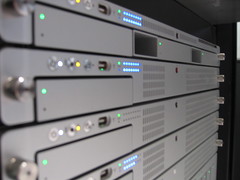 Looks like Apple’s Xserve is shutting down for good. Last week Apple announced that they will discontinue the Xserve, their only rack mounted hardware server solution, in January of next year.

Many in the IT community were hardly surprised. Despite its limited power, connectivity, ability to be rack mounted and add-on options, the Mac Mini has been the OS X hardware server solution of choice. You can even upgrade the RAM in a Mac Mini if you know what you are doing. When asked for a comment, Darren Kitchen, co-host of the popular tech podcast Hak5 had this to say, “I don’t really see the point, they’re just expensive rack mounted Mac Pros.”

But if you already own a Xserve, don’t get too upset. Apple has promised that they will continue to support existing Xserve systems. And you you’re business depends on the Xserve, you can still order them until January 2011.

We had one of the original Xserves from 2002 and we’re really happy with it. Our only gripe was the expensive drives used in the X-Raid. What about you? What did you think about the Xserve? Are you happy/sad to see it being discontinued by Apple?