The founder of National Tree Day wants the Federal Government to help save a rare Tasmanian tree. 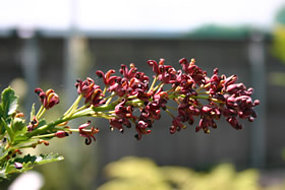 There are less than 500 kings holly, or kings lomatia, trees left in a small patch of the state’s south-west.

Kings lomatia is the oldest known plant clone. It stopped seeding and has been cloning itself for at least 43,000 years, remaining genetically identical over that time, which increases its vulnerability to disease and other threats.

“The future of this tree is definitely not assured,” he said.

“It’s survived an ice age but it may not survive us. It certainly won’t survive a bushfire, and that’s why the conservation of this tree must be made a national priority by the Federal Government.”

A botanist from the Royal Tasmanian Botanical Gardens, Natalie Tapson, says it is hard to increase the plant’s numbers because it does not make seeds.

“The wild population is threatened by root rot disease. Fire is another problem. So this is an insurance collection basically, in case something happens in the wild at least we’ve still got some that are surviving,” she said.