Newspapers, other blogs, and even your weird Aunt's roommate have already reviewed this thing, but we'd thought we'd add our two cents. Here's our first generation Apple TV review.

You may have heard of that new Apple product, I believe it’s called the, uhh, Apple TV. Newspapers, other blogs, and even your weird Aunt’s roommate have already reviewed this thing, but we’d thought we’d add our two cents. Here’s our first generation Apple TV review.

NERD NOTE: The Apple TV was announced by Steve Jobs during the keynote speech at the 2007 Macworld Expo in San Francisco on January 9, 2007.

I was expecting set up to be a breeze. It was. I’ve come to expect that from all Apple products. The packaging was simple, just the Apple TV itself, a remote, a power cord, and a manual. 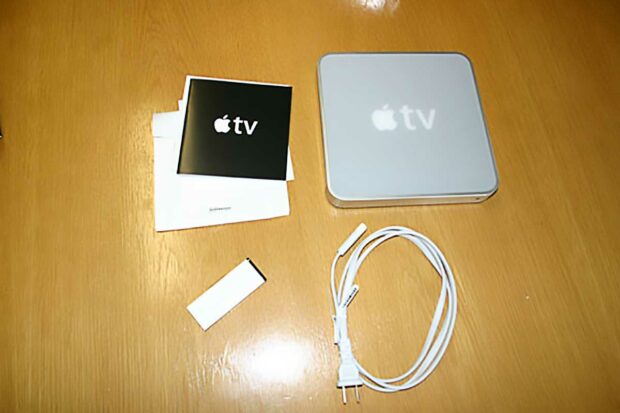 It did not include any cables, not even a cheap RCA. But, we’re talking about Apple, they’re not known for handing out freebies. Fortunately, Amazon sells a relatively cheap HDMI cable for only $20. 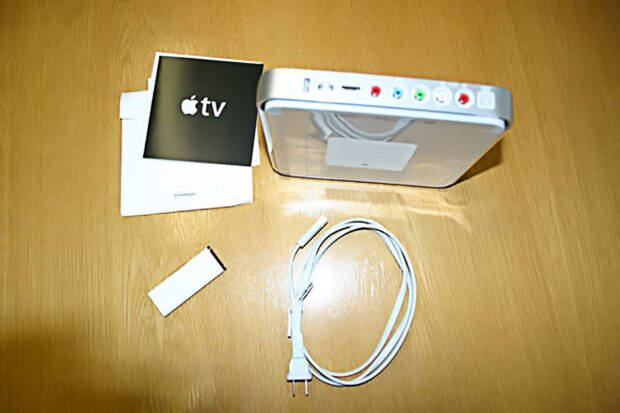 The most complicated part of the setup was figuring out how to set up my receiver to display the Apple TV. Once that was done, I directed to connect to a network by the Apple TV setup guide and after that, I was asked to open iTunes and enter my syncing password (for syncing, duh!). 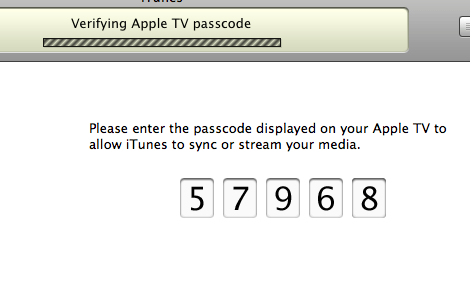 As soon as I opened iTunes, I saw a page asking for a password. I entered it in, and the device authorized. Then it automatically began syncing my content– music, podcasts, TV shows, and movies. I canceled that as I wanted to play around with it rather than waiting an hour for it to sync over my 802.11g network. Syncing wise, you have plenty of options. You can tell iTunes to sync only music, selected playlists, only certain shows, etc. As far as I can tell though, you cannot selectively delete songs or TV shows.

Playing A Video On The Apple TV

I easily connected to my own iTunes library (not syncing, streaming.) and selected a TV show to watch. In about 10 seconds I was watching my show and the only hiccup was my fault. Closing the lid/sleeping the computer your streaming from will interrupt the stream (it sounds so obvious now). I quickly resumed though and the Apple TV remembered where I was. The rest of the show went without a hitch, I pretty much forgot what I was watching it on (other than the non-HD quality.)

The TV I have the Apple TV hooked up to is a 60″ plasma, needless to say, I wasn’t expecting 1080p quality from my iTunes-bought shows. I was actually surprised at the quality though, it wasn’t spectacular but I never thought to myself: “Wow this is complete crap!”

If there’s one thing Apple is just amazing at is interface design. The iPod has a brilliantly simple UI and the Apple TV also has a lovely UI.

The UI itself is in HD quality, so it looks astounding on your TV. It also uses the simple, sometimes too simple, Apple Remote. Navigating is easy enough and finding your way around the device is no problem. Honestly, it’s all logical, you really don’t have to think about it.

This isn’t a super in-depth Apple TV review. Just more of a general overview to give you a feel for the Apple TV. Personally, I think the price is a little high at $300 for what it is, which is a way to get content you already paid for on your TV.

Here are a few gripes about the first generation Apple TV.

Still, I’m really enjoying it so far and you really can’t beat the simplicity you get from an Apple product.