Apple CEO, Steve Jobs was thin, but the new iPods were thinner at Apple’s “Let’s Rock” press conference yesterday. In addition to new versions of the iPod Nano and iPod Touch, Jobs also announced iTunes 8.0 and a “Genius” feature.

Apple is revamping its iPod line up. The thicker iPod classic is history. It will be replaced with a slimmer 120 GB model for $249. The new iPod Nano promises to be the thinnest iPod yet and ships with the “Genius” ability to create intuitive playlists without having to connect to iTunes. A new version of the iPod Touch, which will be out in time for the holidays, is also thinner and comes with integrated speakers for listening to music and online radio on the go. Both new models will also ship with new headphones that include a remote control and a microphone. 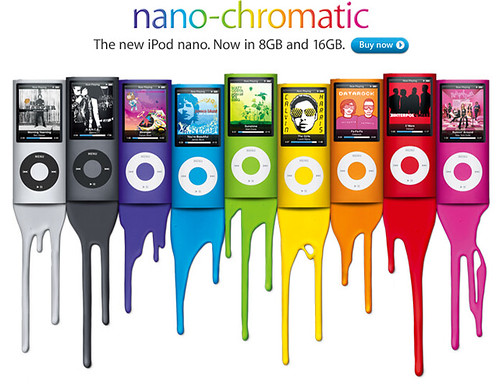 iTunes 8.0 gets a new “Genius” feature that automatically generating playlists of songs that “go great together.” The Genius Sidebar can be set to upload your library contents to the iTunes Store so that it’s better equipped to recommend songs you might like. If you’ve ever used the streaming music service Pandora, then you probably have a good idea of what the Genius Sidebar is capible of.

It looks like Kevin Rose’s blog post that predicted Apple would release new iPods and an iTunes update this month was correct. The raw image mockup was even right.