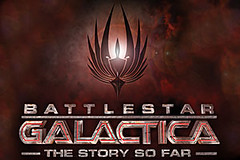 I found this official press release on the Sc Fi Channel website:

SCI FI Channel and its sister NBC Universal networks will air a one-hour recap special of the original series Battlestar Galactica in advance of the show’s October third-season premiere. Battlestar Galactica: The Story So Far will incorporate footage from the original SCI FI miniseries and the previous two seasons of the Peabody Award-winning series. The special will be narrated from the point of view of Laura Roslin (Mary McDonnell), the resistance leader on Cylon-occupied New Caprica.

Throughout September, The Story So Far will also be made available for download via iTunes and XBox Live and will be distributed at Best Buy as a bonus DVD with the Battlestar Galactica season 2.5 DVD set and other genre titles from Universal Home Video. The DVD will also be distributed to visitors to the Universal Studios theme parks, and snippets of the special will be available on YouTube.com, Google Video and other video portal sites.

Here’s the iTunes download link for: Battlestar Galactica: The Story So Far. Why not download it? It’s a great show and the price is right (free).