There was a bit of a surprise when Katee Sackhoff told reporters that her time on the new NBC series “Bionic Woman” went from “one episode” to “recurring.” But all of that can be explained in one simple sentence: Sackhoff simply wowed network executives.

Some of the clips featuring Sackhoff, best known to genre fans as Kara “Starbuck” Thrace in SciFi Channel’s “Battlestar Galactica,” have been released to the Web by NBC Universal as a way to promote the series, which will make its debut this fall. In it, Sackhoff plays the original bionic woman who gets in a rooftop bionic battle with Jamie Sommers, played by series tar Michelle Ryan. 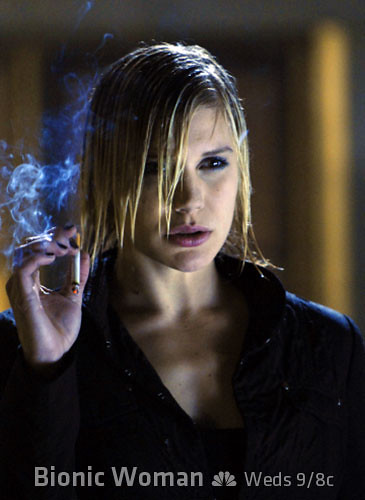 Sackhoff’s character originally was slated to be offed in the pilot, but executives liked her so much that she is now going to be pulling double duty between both shows which are filmed in Vancouver and produced by NBCU.

Sackhoff apparently isn’t the only BSG alum to be making the show either… two more actors familiar to “Battlestar” fans who have some type of role in the pilot.