Every time Conan O'Brien tweets, the Twittersphere goes gaga. Well, he's at it again. And this time it's a contest to meet him on tour thanks to American Express. 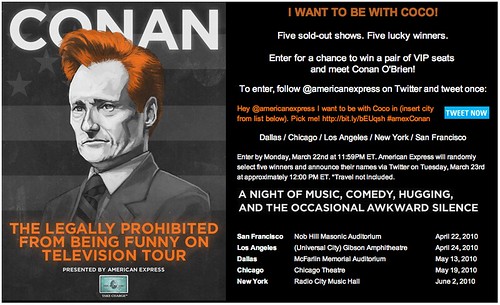 To enter the contest, all you have to do is follow American Express on Twitter and tweet, “Hey @americanexpress I want to be with Coco in (insert your city of choice). Pick me! http://bit.ly/bEUqsh #amexConan.”

iPad Won’t Support Picasa
Next Post:75 Funny Out Of Office Messages That Will Make Your Coworkers Smile