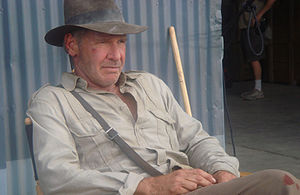 Looks like Sean Connery doesn’t want to be Indy’s daddy anymore. After months of talks, Sean Connery has decided not to come out of Indiana Jones retirement to star alongside Harrison Ford in Steven Spielberg‘s “Indiana Jones 4: The Kingdom of the Crystal Skull.” Principal shooting begins this month. This will be the first time that an Indiana Jones film has been in production in nearly 20 years.

Connery would have reprised his role as the father of the archeologist-adventurer. Shia LaBeouf, Cate Blanchett, John Hurt and Ray Winstone have all signed on.

George Lucas’ Lucasfilm is producing “Indy 4,” which will be shot at locations around the world. The storyline is being kept under wraps, but Lucas already ruined Star Wars with his latest trilogy. Wanna bet he screws up Indian Jones too? Maybe Sean Connery made a good decision. Guess we’ll find out soon. Indiana Jones and the Kingdom of the Crystal Skull is set to hit theaters on May 22, 2008.
Related Articles: