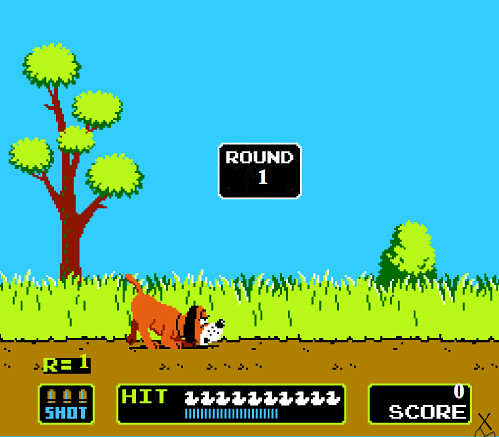 If you grew up during the 1980s, then perhaps you might remember playing an 8-bit shooter called Duck Hunt. Released for the NES (Nintendo Entertainment System) in 1985, Duck Hunt was one of the first games to use the “NES Zapper” or light gun.

At the time, my little brother and I didn’t care how the gun worked, we just didn’t want the dog to laugh at us. Sometimes we would hold the light gun against the glass of the TV and try to cheat. 20 years later I’m more interested in learning how the game worked than preventing the dog from laughing at me.

So how does the light gun work? How exactly does Duck Hunt know what you were pointing at when you pull the trigger? According to an article on The Straight Dope, the gun isn’t shooting the TV, it’s the other way around. When you pull the light gun trigger, the entire screen blackens briefly and a white duck flashes on the screen where the duck(s) are located. If the photo sensor in the light gun detects a quick flash from dark to light, then you have a dead duck (and a non-laughing dog). Basically the TV shoots a light pulse and the “gun detects it, not the other way around.”

Finding a working NES, light gun and original Duck Hunt cartridge can be a little tricky and require some time searching around on eBay. If you’re looking for a quick fix, you can play an online Shockwave version of Duck Hunt here. You’ll have to settle for a mouse instead of a light gun, but you’ll probably have fun anyway.

The Oregon Trail: Play The Classic Game on Your iPhone
Next Post: The Sasquatch Burger: Would You Order This Monstrous Hamburger? Could You Finish It?