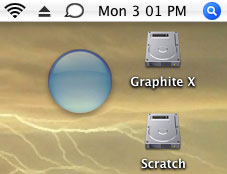 Like using Exposé but hate hot corners and function keys? Why not unleash the hidden Exposé Blob built into Mac OS X? You can even make your blob look like Eric Cartman or Meatwad from ATHF. 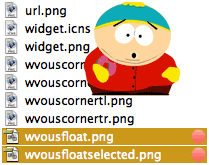 When Apple introduced Exposé in OS X 10.3 Panther, many people felt it was the best new feature in the entire operating system. In case you have no idea what Expose is, basically it’s a component in the Macintosh operating system that allows you to instantly access any open window or document with a single keystroke. Dragging your mouse into a hot corner or pressing a function key instantly tiles and scales all of your open windows and documents so you can see everything you are working on in a single glance.

Yes, it is a great feature, but activating Exposé is sometimes kind of awkward. Personally I tend to accidentally hit the wrong function key and usually turn on my screen saver several times with a mistaken hot corner before activating finally activating Expose.

The programmers at Apple probably felt the same way. Hidden deep within the Mac OS is a secret, yet fully functional, graphical interface for Exposé. Most people like to call it a “blob.” The Blob is really just a shaded blue sphere. The Blob is moveable, clickable and a nice addition or mascot for your Macintosh OS X Desktop. You can even customize the Blob to be any image you want. For example, I’ve customized my Blob to be Eric Cartman from Comedy Centrals’ South Park.

Tutorial: How to activate and customize the Mac OS X Exposé Blob