Heavy D was very active on Twitter. On Nov 8, 2011, he tweeted for the last time and said: "BE INSPIRED!" We couldn't think of a better final tweet. 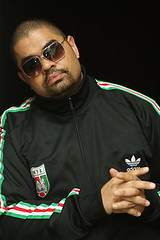 Do you have a dead “friend” yet? Depending on how active a Social Media user you are, unfortunately, you probably do. Whether they are a real face-to-face friend or even a celebrity, there will still be a void. Their tweets will just… stop. That was the case moments ago. Rap legend, Dwight Arrington Myers, better known as Heavy D, has passed away. The news broke on Twitter when fellow rap legend, Grandmaster Flash, posted the following on his Twitter account: “I was just told Heavy D passed away.”

Heavy D was an actor, rapper, record producer, singer and the former leader of Heavy D & the Boyz. He’s best known for a series of respected albums during the ’80s and ’90s including the album “Peaceful Journey” which contained the top 20 single “Now That We Found Love” in 1991. Heavy D & the Boyz’s also performed the theme songs for the television programs “In Living Color” and “MADtv.”

Heavy D was very active on Twitter. Last night (Nov 8, 2011) he tweeted for the last time and said: “BE INSPIRED!” And honestly, we couldn’t think of a better tweet to leave online as a legacy. His Twitter account will live on and function almost as a virtual gravestone for fans to remember him and share their @HeavyD stories. Kind of makes you wonder if your next tweet good enough to be your last?? 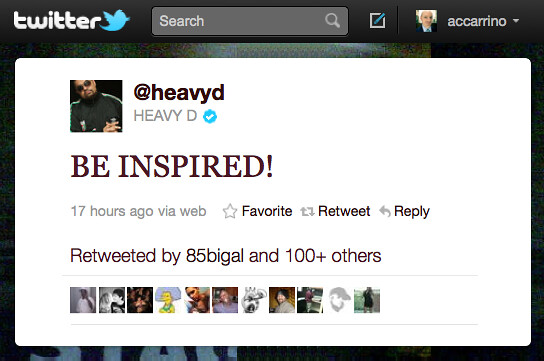 OMG – Have You Seen This Bacon Vending Machine?
Next Post: Which Network Should You Post Your Social Media Status To?