It looks like more ordinary people with ordinary abilities have been discovered. Here’s a clip from the open auditions for the American Sci-Fi series Heroes on NBC. 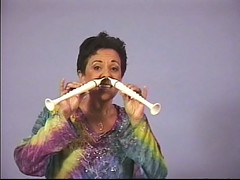 The clip features some guy pulling a chain out of his nose (burn out), a woman playing the flute with her nose (don’t laugh, that’s someones mom), a guy who can pop beans out of his eye (that’s sexy), an Indian woman who can talk with a perfect Indian dialect (amazing!), a psycho who can stab a potato with a straw (very scary), and more…

I’m pretty sure no one from these open auditions will be saving the world with their “special” talents.