Here's a look back at the legendary 1994 Howard Stern for Governor of New York state campaign and how the shock jock never really took it seriously.

From Donald Trump to Clint Eastwood, several celebrities have been able to leverage their popularity to win votes. Win or lose, if you want to grab headlines, the press love it when a celebrity runs for public office. One of the biggest headline-grabbing political races of all time was Howard Stern’s entry into the New York State Governor’s race. Here’s a look back at the legendary Howard Stern for Governor campaign and why it was all just a big publicity stunt.

Celebrities In Politics: It’s Not Always A Successful Combination

Donald Trump (US President 2017 to 2021) obviously wasn’t the first celebrity to win an elected office. After being active in the entertainment business for several decades, Ronald Reagan served as the Governor of California from 1967 to 1975, and then President of the United States from 1981 to 1989. Actor Arnold Schwarzenegger was Governor of California from 2003 to 2011. And Schwarzenegger’s costar from the film, Predator (1987), Jesse Ventura, also ran and successfully won the Governorship of the state of Minnesota in 1999.

But being a celebrity doesn’t guarantee you a win. Cynthia Nixon (Sex and the City), Kanye West, Clay Aiken, Shirley Temple, and Roseanne Barr all failed to impress voters at the polls and lost their respective elections.

And sometimes, a celebrity run for political office is just a publicity stunt, as with the case of the Howard Stern for Governor of New York campaign.

The 1994 Howard Stern For Governor Campaign

Although he eventually withdrew from the race, shock jock Howard Stern won the Libertarian Party’s nomination for New York Governor in the 1994 race against incumbent, Mario Cuomo.

The Howard Stern for Governor campaign was short, it only lasted four months, but it provided hours of great radio. Howard dropped out after a judge ruled that he had to disclose his personal finances before continuing in the race.

Similar to how press coverage of Donald Trump’s presidential run in 2016 earned billions of dollars in free advertising, Stern’s campaign was a huge focus for reporters. Pre-social media, Stern’s radio show gave him the publicity platform he needed to constantly be in the news cycle. And because his radio show was syndicated across the country, the Howard Stern for Governor campaign generated national headlines.

NERD NOTE: In 1993, Howard Stern got involved in the Governor’s race for New Jersey. He promised to support the first candidate that agreed to call in to his radio show. Republican Christine Todd Whitman called in and Stern urged his listeners to vote for her. Whitman won and became the first female Governor in New Jersey’s history. In exchange for Stern’s endorsement, Whitman named a NJ rest stop after Stern.

While Howard was running for Governor of New York, nothing was more important to him… while he was on the air. Unfortunately, that’s where it stopped. Howard’s candidacy, great ideas, and involvement in the future of the Libertarian Party all ended as soon as he turned off the mic.

Beyond disclosing his taxes, Stern also needed to get a petition signed with several thousand signatures to get on the ballot. With his extreme popularity at the time, he would only need to casually ask his fans once to get enough signatures, but he never did. Stern also never fully engaged with senior members of the Libertarian Party after he won their nomination.

Instead, Stern’s focus was on material for his radio show like his purposely offensive campaign ads featuring comments from people who hated him. There was also a brilliant campaign theme song by David Peel (1942 – 2017) called Howard Stern for Governor.

Peel’s Howard Stern for governor song featured lyrics like “He wants justice / He’s a libertarian / He is a great American / Howard Stern can defeat the Democrats / and beat the Republicans.”

Unfortunately Stern dropped out of the race before the first debate against Gov. Mario Cuomo. It’s too bad. Seeing Stern on the debate stage would have likely attracted a huge national audience. However, late night comedy show Saturday Night Live recreated what they thought the Howard Stern vs Mario Cuomo debate would look like in an opening sketch.

Cast member, Michael McKean (Spinal Tap) did an incredible impersonation of Stern. He hogged the mic, engaged in self-promotion, and barely let his opponent, Mario Cuomo (Phil Hartman) get in a few words. True to form, the skit also featured a Stern endorsement for Snapple ice tea, one of Stern’s long-time on-air sponsors.

Would Howard Stern Have Won The Race For Governor? Would He Even Be Happy With That Victory?

So if Howard Stern hadn’t dropped out, would he have won the race for Governor? Between his record-breaking radio ratings, book sales, pay per view specials and movie, Private Parts (1997), Stern was at the peak of his terrestrial radio career in the mid-1990s. At the time, he had millions of loyal fans across the United States, but his notoriety was strongest in his home state, New York. Could the Howard Stern For Governor campaign translate Stern’s popularity into votes?

If Stern hadn’t dropped out, he might have lost some ground when pressed on the real issues, or made some mistakes in a debate. Regardless, I think he would have won the election. But at what cost? If elected, Stern would have had to leave his radio show. And as all Stern fans know, nothing means more to him than the power of being on the air.

“Be careful what you wish for, lest it come true!”

As the famous saying goes, you have to be careful what you wish for, because you might get it. In other words, sometimes winning is actually losing. Winning the election would have just made the already miserable Stern even more miserable — and without an outlet to vent, his radio show. 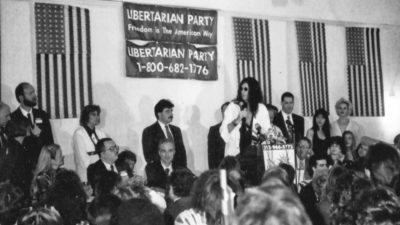 Here’s a look back at the legendary 1994 Howard Stern for Governor of New York state campaign and how the shock jock never really took it seriously.

Please join the MethodShop community to get the latest news, tutorials, and more!

Why Do Actors Think All Birds Say “Ka Kaw”?
Next Post:How To Retract A Bid On eBay