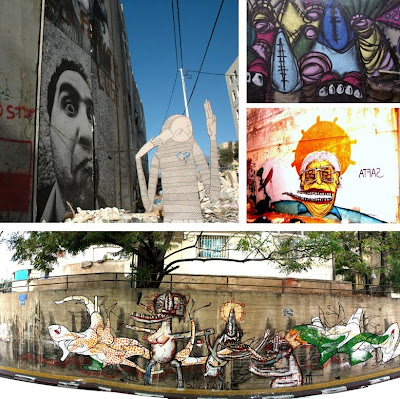 It appears that the paintings of world’s hottest British art star Banksy on the Palestinian side of the separation wall in the West Bank in summer 2005 were just the tip of the iceberg. Street art and graffiti scenes gain strong International momentum in Israel recently. Much of this trend is attributed to talented immigrants from former U.S.S.R. countries while there are also many active street artists in Israel who immigrated from European countries and North America. 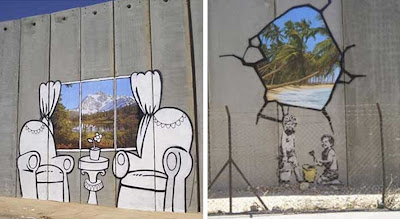 As opposed to the Banksy case (above) and perhaps to what you may expect from street art in Israel, most of the street art messages are not related to the Israeli-Palestinian conflict but to internal society issues, while others refer to the conflict in a general, none-confronting approach. Some look at graffiti and street art as a form of vandalism. Others see it as a legitimate way of expression in a world where most public urban space belongs to commercial cooperates. This way or another, the new trend spices up the already heterogenic society in Israel with more multicultural sauce. Following are a few recent outstanding examples.