Have you ever plugged your iPod into a computer and watched in horror as all the music on got erased? If so, it sounds like you have an "Auto Sync" problem.

Have you ever plugged your iPod into a computer and watched in horror as all the music on got erased? If so, it sounds like you have an “Auto Sync” problem.

You may think that all the music on your iPod would get copied onto the new computer, but it WILL NOT. Your iPod is read-only. It is a slave to your computer. Your iPod will only copy music off a computer, not add music to a computer. Unless you do this hack: How to Copy Music Off Your iPod.

This article will help you properly configure your iPod Auto Sync settings. It also has some horror stories from other MethodShop readers.

How to Disable Your iPod From Automatically Syncing in iTunes

iTunes may irrecoverably delete all the songs on your iPod if you have it set to “Automatically Update” your songs. To prevent this:

You can also uncheck the AutoSync setting in iTunes while your iPod is mounted to your computer. Depending on your version of iTunes, the settings screen may look different.

This is a screenshot from 2007 of a 55GB Video iPod with software version 1.2.1. The iPod is selected from the left column in iTunes. The “Options” row has a “Manually manage music and videos” option. 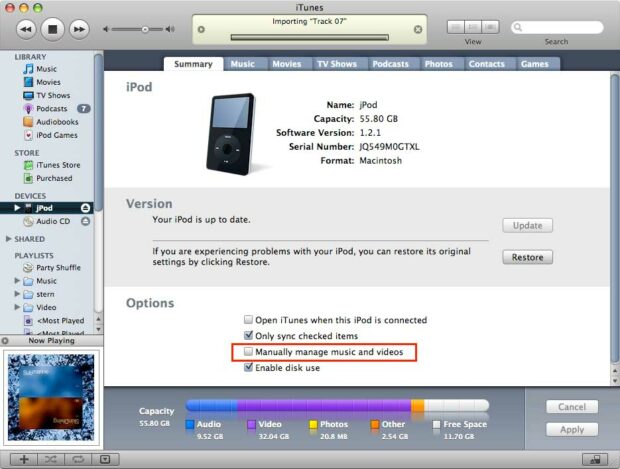 Here are some common Auto Sync related issues. Do any of these situations or problems sound familiar?

HOW TO DISABLE AUTO SYNC

No problem. Plugin your iPod to your computer, then click on the iPod preferences button we’ve highlighted in red.

or click on your iPod in the Source window on the left under the “Devices” heading. Then customize your settings from the preferences. 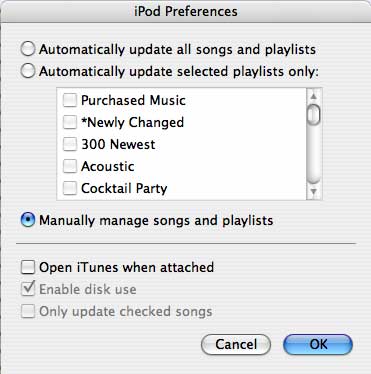 “If I connected it up, clicked on the iPod in the source list and then changed the setting, would it have enough time to erase everything before I can change it?” ~ lura101

Try this. Hook up your iPod to a different computer – other than the one you normally sync with. Just make sure this other computer has iTunes on it. iTunes should ask if you want to link your iPod to this new computer. Say “no” and change the sync settings to manual. Then copy the music off your iPod.

“I recently had to reinstall Win XP from scratch, resulting in the loss of all my files. I reinstalled the iPod and iTunes, but when I attempted to transfer the contents of the iPod back to my music folder, the iPod appeared empty. it shows up as empty when accessing it in disk mode too. how can I recover my music?” ~sp00nage

When you erased your computer, you erased all the music that was on your hard drive too. Did you set iTunes to Auto Sync? If so, because you had no music on your computer, your iPod synced to nothing and basically just erased itself. I’m sorry. All your music is probably gone. In the future, I suggest burning CDs or DVD’s of your music frequently. Many people have learned this lesson the hard way.

“I had to do a destructive recovery on my PC after it caught a virus. It destroyed my iTunes library. I still had the songs on my iPod, followed your advice on how to restore my library from the iPod and successfully pulled all my songs onto the library. Then I allowed my iPod to sync. , it seems my IPOD has been wiped clean of songs. Please help.” ~ Doug

I bet you have AutoSync enabled. When you synced your iPod to your computer, iTunes made your iPod mirror what music you had on your computer (which was nothing). This resulted in you having no music on your iPod. Keep in mind that your iPod syncs to your computer, not the other way around. This is a common mistake and Apple should really install better safeguards to help prevent this problem. You can try searching for invisible files on your iPod and ripping the songs off it, but that is a long shot.

“Hey guys, you have a great website for iPod tech support. Better than Apple. Unfortunately, I tried to use my iPod today, but all the music was gone! There was nothing listed in the Examine part. The About screen shows there are 0 songs, but the hard drive is mostly full still. Don’t think I’m an idiot, I’ve had an iPod almost since the first they came out. I really don’t know what happened or what to do. The worst part is I live in Bolivia, and my Mac with all my songs on it is 10,000 miles away in Portland, Oregon, so it’s not like I can just re-sync everything. By the way, I tried Apple’s support and discussion pages, but man they really suck!” ~ todd

Ouch. You might have a fragmented hard drive which means you probably have to wipe the iPod and start over. Here’s a tutorial on how to erase your iPod.

“My iPod won’t update new CDs on my computer. It says I have erased one of the playlists that it is meant to go on. I’m using windows and the iPod web site won’t tell me anything. help!” ~rupert

Turn off AutoSync and organize your playlists on your computer. You may want to erase all music on your iPod. Then turn Auto Sync back on. That should do it.

SEARCHING FOR LOST AND/OR ERASED MUSIC

“After some problems with my iPod, I reinstalled Itunes. Itunes in the INSTALL PROCESS asks for the iPod. Next thing I know the iPod song list is empty. Itunes even though it just installed ITSELF deletes all the songs on your iPod to put its playlist on it that doesn’t have anything in it. Duh! I tried several utilities to recover deleted files and they didn’t work. They saw folders but said the folders were empty or unrecoverable. I finally found a program called “recover my files”. I was able to recover the 737 mp3s on my girlfriend’s iPod. The web site is the name of the program. http://recovermyfiles.com. There is a shareware version.  the only feature missing from the shareware version is the restore feature.  You can still visually preview most files such as images.” ~ Chris

Mac and PC users can also try using a program like Norton Utilities. Norton Utilities is a suite of different disk utilities including an application called Unerase. The hierarchical recovery in Unerase lets you retrieve entire folders as well as individual files. You may have some success in recovering your lost music files with Unerase. But don’t use the de-fragging or disk utilities that are part of Norton’s application suite. Due to numerous problems and lawsuits brought on by unhappy customers, Norton is discontinuing all their utility programs and concentrating on just doing virus protection.

“I connected my iPod to an iMac down here (we do have an internet cafe with a G4 iMac in Bolivia) and was able to get into my music via the Terminal. The were hiding in folders named F00-F19. To make a long story short, I found all but 100 of my tunes (where the others are is a good question), and now I can nuke the iPod and get my music back. For some reason, I think those 100 songs where a Smart Playlist the listed my last 100 songs played. Hmm…. Have you ever dug through the contents on the iPod? There is a folder call iPod_Control that has some interesting stuff in it. ” ~ todd

The “iPod Control” folder is the iPod’s System Folder. If you modify it or erase it, your iPod becomes just a portable hard drive and won’t play music. But you are right, it does have good stuff inside.

Press mentions of this article elsewhere on the Internet:

Is It Possible To Use Multiple iPods On One iTunes Account?
Next Post:MethodShop.com’s first official Blog post