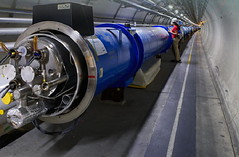 Whew! If you are reading this, then the world didn’t end… yet.

Yesterday the Europeans fired up the Large Hadron Collider (LHC) and started shooting protons down a 17 mile-long tunnel at the speed of light in a massive underground laboratory near Geneva, Switzerland.

Many people were outraged and understandably worried about the LHC tests. Any miscalculations or mistakes by the LHC scientists could hypothetically result in a doomsday scenario. What happens if the LHC rearranges the atomic nuclei of all matter on Earth? And a side-effect of the LHC is micro-sized black holes. What would happen if these tiny black holes slowly sucked away all matter on Earth over the next few hundred years? What happens if they make a big black hole? Opening up a black hole in the middle of the Earth would end life as we know it.

There are plenty of doomsday scenarios connected to the LHC and a lot of people are questioning if anyone has the right to conduct these potentially catastrophic tests. Former nuclear safety officer Walter Wagner has taken his concerns to U.S. court and is asking the U.S. Department of Energy, CERN, Fermilab, and the National Science Foundation “to ease up on their LHC preparations for several months while the collider’s safety was reassessed.” 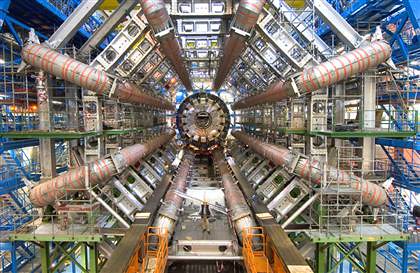 There are a lot of unknowns and risks connected to the LHC. So why exactly are these scientists playing with proton beams? What does humanity stand to gain by their risks? The experiments taking place at the Large Hadron Collider hope to answer some of the biggest questions of modern science:

But is knowing the answers to these questions, worth the risks?

Just turning on the LHC yesterday didn’t end the world, but don’t rest easy just yet. The big Large Hadron Collider experiment takes place October 21st when scientists will aim 2 proton beams at each other and “see what happens” when they collide.

There are a couple live webcams at the LHC if you also want “to see what happens.” Seriously, watch them for at least 30 seconds. These aren’t your everyday webcams. 😉

These #LHC pricks better not destroy the planet. Switzerland, fine. Earth, no way. Can’t the Euros travel to an abandoned galaxy before they start hosing each other down with doomsday proton guns?