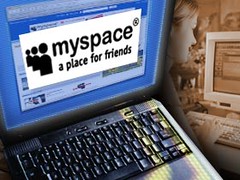 Top law enforcement officers from Connecticut and 7 other US states have asked MySpace.com to turn over the names of registered sex offenders who use the social networking Web site.

In a letter, the attorneys general asked MySpace to provide information on how many registered sex offenders are using the site, and where they live. North Carolina Attorney General Roy Cooper signed the letter, along with attorneys general from Connecticut, Georgia, Idaho, Mississippi, New Hampshire, Ohio and Pennsylvania.

In a statement, Cooper’s office said media outlets in 2006 “reported almost 100 criminal incidents across the country involving adults who used MySpace to prey or attempt to prey on children.”

Let’s hope new social networking sites, like Facebook, learn from MySpace’s mistakes and make the user experience more about individuals connecting with real friends and not anonymous perverts trying to rack up massive lists of “friends” they don’t actually know.