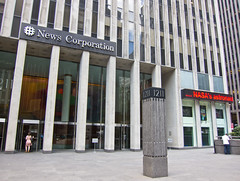 Google and MySpace, two of the biggest names on the Internet struck a nearly billion-dollar deal Monday to combine the search and advertising technology of Google Inc. with the massive online audience of News Corp.’s MySpace.

The agreement, worth at least $900 million to News Corp. over the next four years, capitalizes on the popularity of so-called social networking sites and may be a key step toward turning the new-media mash of teenage ruminations, artwork and photos into a viable channel for advertisers.

Although MySpace attracts more than 50 million U.S. visitors a month, some big companies fear their ads might appear next to racy content created by the site’s members. Google has prospered by bringing a mathematical efficiency to the Web, and its role as MySpace’s primary ad broker could provide the financial support social networking needs to avoid becoming a passing fad.

“Google essentially locks up the biggest source of traffic among the younger demographic on the Web,” RBC Capital Markets analyst Jordan Rohan said. “It’s wild, untamed traffic today. Google is essentially trying to build a toll road through the jungle.”

The deal also answers an important question about how Rupert Murdoch‘s News Corp. plans to recoup the more than $1.2 billion it spent last year to acquire MySpace, the Web’s most popular social networking site, and IGN Entertainment, which runs the Rotten Tomatoes and GameSpy websites.

“In one fell swoop, we paid for about two-thirds of all of our Internet investments, and we’ve already paid for MySpace with a 70% premium,” News Corp. President Peter Chernin said. “Whoever said it remains to be seen if we can monetize it, hopefully things are a little bit more clear this week than last week.”