If you go to Napster.com, you might recognize the same old Napster logo from the Shawn Fanning days (Napster’s founder circa 1999), but now there’s a tiny Best Buy tag in the bottom of the homepage. Last year right before the American economy tanked, Best Buy bought Napster for a $121 million. All has been quiet on the Napster front until this week when Best Buy unveiled their new plan for the former file sharing service. 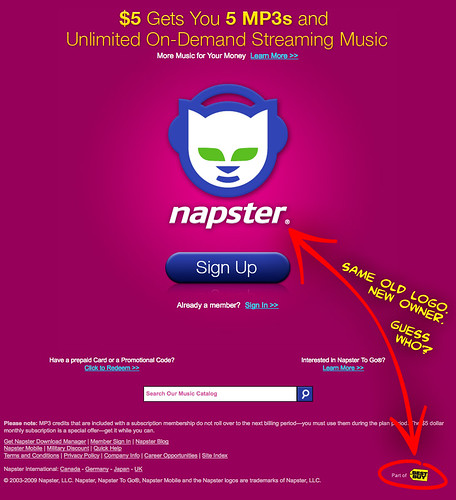 The new version of Napster now has a $5 monthly subscription plan (when Roxio owned Napster it used to be $15). So what do you get for your $5 a month?

Can this new version of Napster really compete with Apple‘s iTunes? It’s doubtful. The only feature Napster offers that iTunes doesn’t is streaming music. But there are plenty of free services on the Internet, like Pandora, that offer streaming music. iTunes users can just buy what music they want in the iTunes Store, use Pandora for free and get everything the new Napster offers without the $5 subscription fee.